Home Entertainment The Valyrian Dagger of the House of the Dragon is an artifact... 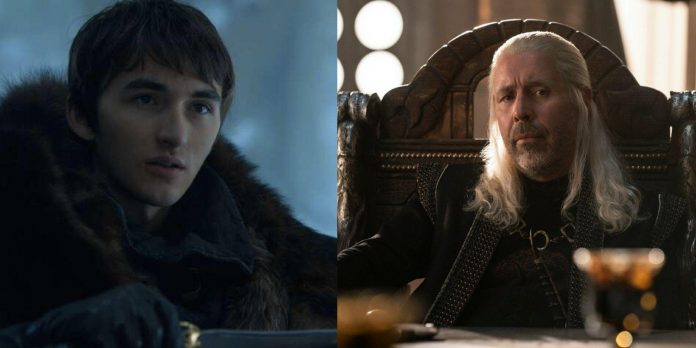 The HBO series “House of the Dragon” triumphantly went online, breaking a number of records at the same time. The Game of Thrones spin-off ushered in a new era in Westeros as it began chronicling the long reign of House Targaryen 172 years before Daenerys Targaryen. As expected, the premiere of “House of the Dragon” was replete with references to “Game of Thrones”, including one weapon owned by King Viserys I.

From the familiar location of King’s Landing to prominent surnames and historical references, Dragon House has many connections that can be drawn to Game of Thrones. One of the most striking inclusions in the “House of the Dragon” is the dagger of Viserys. The weapon is best seen during his conversation with Rainira in front of Balerion’s skull. Viserys tells Rainria about Aegon’s prophecy called “A Song of Ice and Fire”, which was passed down from each king to his heir. After Rainira was named her father’s heir, she earned the right to keep a secret. While A Song of Ice and Fire is a clear link to Game of Thrones, Viserys’ Valyrian dagger is another stand—out link.

The dagger of Viserys appeared several times in Game of Thrones. In the first season, the blade appeared in Winterfell in the hands of an assassin who was tasked with killing Bran after he was pushed off the tower. Interested in the nature of her son’s injury and the killer sent to finish the job, Catelyn begins to form a relationship with the blade. Further investigation into the high cost of the dagger led Catelyn to King’s Landing. There, Littlefinger recalls how he lost the dagger in a dispute with Tyrion, although the true nature of the story changes roles. Littlefinger’s confession sends a whirlwind of rash decisions that heighten tensions between the Starks and the Lannisters. Eventually, the assassin’s dagger begins to set in motion some of the biggest plots of Game of Thrones.

In a confusing scheme, the Little Finger gives the blade to Bran a few seasons later. Unable to defend himself as the Three-Eyed Raven, Bran gives the dagger to Arya, who has now become a trained assassin. In a small taste of justice, Arya appropriately uses a Valyrian dagger to kill Littlefinger in Winterfell, after all the damage he caused to their family. Sam’s research at the Citadel also works in favor of the Blade, as he learns that Valyrian steel and dragon glass can be used to kill White Walkers. Therefore, Arya also uses a dagger to kill the King of the Night.

Through his research, Sam also inadvertently discovers a connection between the weapon and the Targaryens, who are the focus of the House of the Dragon. The great book of the Citadel notes that Aegon and many of his descendants decorated their weapons with dragon glass. After all, this tactic was common among other wealthy men and women who could afford it. The fact that Viserys mentioned Aegon’s prophecy in The House of the Dragon may indicate that Aegon knew about the power of Valyrian steel and dragon glass in the future. Given the nature of the blade and the secret that Viserys bestows on Rhaenyra, Viserys’ dagger may be another artifact that is passed between the Targaryens and their heirs; a tradition that was abruptly interrupted after the murder of the Mad King.

With his insidious history in Game of Thrones, the role of the dagger of Viserys in The House of the Dragon will undoubtedly be just as significant. Previous teasers of “House of the Dragon” have shown that the dagger needs to be used again. Alicent (now played by Olivia Cooke) is armed with a dagger and approaches Rainira. Given the role that Alicent will play in Viserys’ life, it’s not hard to imagine how she could have taken possession of the blade. If what should happen between Alicent and Viserys is not enough, the intervention of Alicent’s father Otto certainly indicates that he will stop at nothing to put himself and his family in a better social position.

“Heirs of the Dragon” also highlights the relationship between Alicent and Rhaenyra, but if the teasers of the House of the Dragon are not enough, very few relationships in Westeros remain unsullied. Combined with the knowledge that dagger is entangled in some of the most deceitful plots of “Game of Thrones”, there is a great chance that history will repeat itself in “House of the Dragon”.

How was the most detailed map of Lordran created for the...