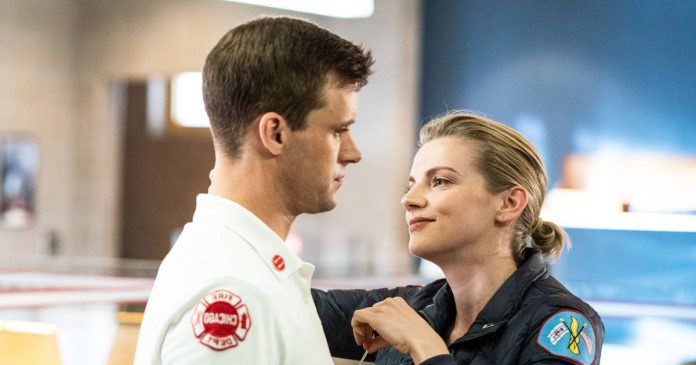 The continuation of season 9 of Chicago Fire continues to set off the alarms of fans of the relationship of Matt Casey and Sylvie Brett, after seeing the first kiss they had.

The second episode of season 9 of Chicago Fire, we saw how the accident occurred that Sylvie Brett and the new paramedic Gianna Mackey suffered in Ambulance 61. So Casey was among the first to go out to rescue her and she told him this:

“It has always been you. I mean, it’s always you who is there for me when I’m in a crisis … Thanks for being such a good friend. ”

Brett has been feeling something for Casey for some time, so she confessed to Stella, the problem with all this is the friendship between them and Gabby Dawson (who left seasons ago).

But, Casey is also feeling something for her, so he decides to face her and ask her head-on, which they ended up giving each other a beautiful kiss. Watch the video here of the scenes to get to this beautiful moment.

The video was created by a fan of the Chicago Fire series, who took all the beautiful scenes between Brett and Casey, to show us the best scene. Matt Casey and Sylvie Brett’s first kiss.

All Chicago Fire fans are eager to know how this story will unfold. Will Matt Casey and Sylvie Brett dare to establish a romance?

BTS designs their outfits for a fun photo shoot