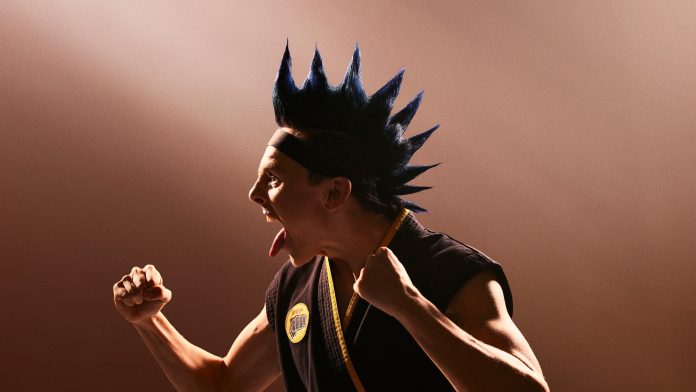 The popular Karate Kid spinoff series Cobra Kai features one of its popular quirks, Eli Hawk (Jacob Bertrand), but why has the character had the color changes in his hair?

After Eli Hawk, suffered a lot of abuse by his companions, he had a radical change in his personality, but, the personality change seems to have reached his hair, becoming an aggressive person.

During the first season of Cobra Kai, when he was still shy, we saw how his “Mohawk” hair style was blue. Which supposes that he felt very low and an anxious person.

In the second season he still had his blue hair, but it was starting to change, but now with the premiere of season 3 of Cobra Kai, we saw the radical change in him.

By season three, his mohawk had turned red when he reached the top of his bullying arc. Which ended up getting into a series of fights with Demetri (Gianni Decenzo), destroying his scientific project and fighting him, but later they become friends again.

“Since blue hair was the most innocent form of him, he was learning and wanted to learn karate to defend himself and change the script,” fans said.

“Then comes the red hair, the most violent form of Hawk we’ve seen to date. I think if he forgives Johnny, he will definitely have a purple Hawk, blue for his motives and red for his experience, resulting in purple, the balance between fighting and forgiveness, ”said another fan.

Season 4 of Cobra Kai seems to be suggesting the possibility that the character may have another change, perhaps to purple, showing that his hair color matches his personality.

See Also
What does the name of Johnny's new dojo mean