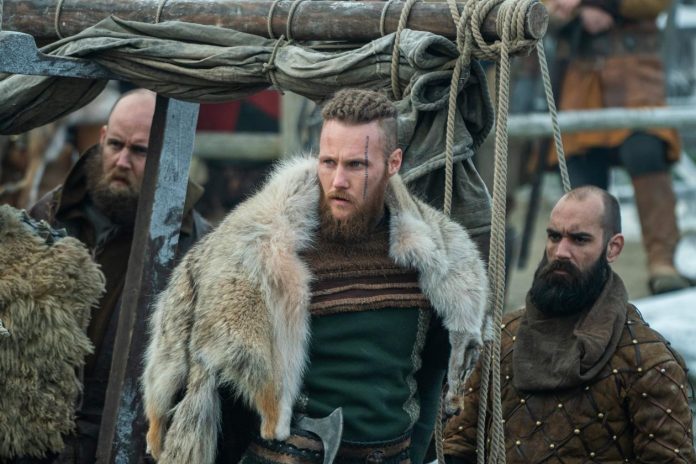 In the last 10 episodes of Vikings, Ubbe (Jordan Patrick Smith) sets out on a journey to the Golden Land that is now part of North America. But did Ubbe really discover North America?

In the final season of Vikings, Floki had disappeared inside a volcanic cave in Iceland and when Kjetill (Adam Copeland) returned to Kattegat alone, Ubbe was determined to locate Floki, dead or alive.

After meeting Othere (Ray Stevenson), Ubbe and his wife Torvi (Georgia Hirst), they set sail, with Othere promising that they would find the Golden Land. First, they came across a land they named Greeland, as there was nothing but brown land.

Kjetill’s hunger for power soon drove them out of Greenland and they were forced out to sea again to find the Golden Land. Towards the end of the final series and on the brink of death, Ubbe, Othere, and Torvi encountered the Golden Land.

The real name of the island was never revealed in the series, but after Ubbe and the group discovered a tribe of indigenous people on land, many Viking fans believed that Ubbe had landed in North America and, in particular, in present-day Canada.

Vikings Ubbe is based on the true Viking military commander of the same name, Ubba, who lived during the 9th century. He was also one of the sons of the Viking legend, Ragnar Lothbrok.

The real Ubbe is not believed to have traveled to North America and instead he is well known in the history books for being one of the commanders of the Great Pagan Army that invaded Anglo-Saxon England in the 860s.

See Also
Vikings: these real facts that appear in the series!

Ubbe is also not believed to have traveled to Greenland, which is today a self-governing territory within the Kingdom of Denmark. As described in Vikings, the Great Heathen Army was established by Ragnar Lothbrok’s son, to avenge the death of his father.

Meghan Markle: this violent sport that she loves to practice!