Home Entertainment The True Story of Elvis: Who was Orion? Explanation of the masked... 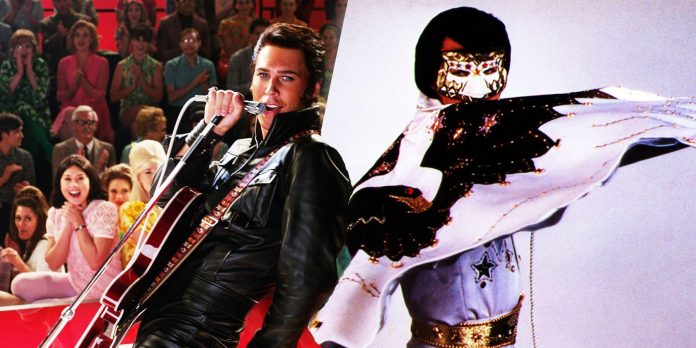 Elvis is Baz Luhrmann’s cinematic homage to the cultural phenomenon of Elvis Presley, a phenomenon on which Presley’s former studio, Sun Records, cashed in on the masked singer known only as Orion. Luhrmann’s film tells the story of Elvis Presley, from his humble childhood to his untimely death, from the perspective of his former manager, Colonel Tom Parker (Tom Hanks). a chance to play Presley’s controlling and manipulative manager.

Parker saw Elvis Presley as the perfect “Snow Job,” a carnival term for an attraction that would convince the public to part with their money. Parker called himself a Snowman, an unscrupulous speculator and fraudster. Luhrmann’s film exposes Parker’s business practices as what was later recognized by the courts as the financial abuse of Elvis Presley. However, Colonel Tom Parker was not the only industrial conman seeking to cash in on the Presley myth, as the history of Sun Records and Orion proves.

RELATED: The True Story of Elvis: How Accurate is It and What changes the Film

Orion’s story begins after Elvis’ untimely death from a heart attack in 1977. While the whole country is mourning the king of rock and roll, orphaned fans flocked to Graceland to honor Presley’s memory, and spoke on camera about their wish that he was still alive. Elvis’ finale doesn’t linger too long on the public outpouring of grief for Presley, but another film, the 2015 documentary Orion: The Man Who Would Like To Be King, becomes a kind of spiritual sequel and tells the eerily similar story of Orion and his own controlling and manipulative manager Shelby Singleton, who sought to profit from leaving Elvis through Orion himself.

Who was Orion? The masked man who spoke like Elvis

The genesis of the artist known as Orion actually began long before Elvis Presley’s death with a singer named Jimmy Ellis. His career aspirations were both helped and hindered by his voice, which was supernaturally similar to the voice of Elvis Presley, and he emphasized this similarity when he sang Elvis songs. Jimmy’s close friends even suggested that since he was adopted and never knew his father, he could be the king’s half-brother. One friend even claims to have seen Jimmy’s birth certificate, in which his biological father is listed simply as Vernon, which is also the name of Elvis’ father.

After hearing about Jimmy’s supernatural singing voice, record producer Shelby Singleton edited Ellis’ vocals into old recordings like Jerry Lee Lewis, releasing and promoting them as “lost” Elvis tracks from the Sun Studios archive. At the same time, writer Gail Brewer-Giorgio was writing Orion, a fictional story about a singer, largely based on Elvis Presley, who fakes his death to hide from the public eye. The Brewer-Giorgio romance, Jimmy Ellis’ career aspirations, and Shelby Singleton’s business combined to create Orion, a masked singer who allowed Jimmy to essentially act as Elvis Presley for those heartbroken viewers who wanted to believe he was still alive.

Orion released a staggering number of records between 1979 and 1981 and toured the United States and beyond. Unfortunately, the royalties for records and public performances never went to Jimmy Ellis. Increasingly disillusioned with Singleton’s control of his career and personality, Ellis publicly tore off his mask and vowed never to wear it again. This proved once and for all that Orion and Elvis Presley were two different people, and immediately severed Ellis and Singleton’s working relationship. The parasitic relationship between Singleton and Ellis is eerily similar to the dynamic between Tom Hanks’ Elvis role and Austin Butler’s Presley, proving that Jimmy Ellis and Elvis Presley had much more in common than their vocal range.