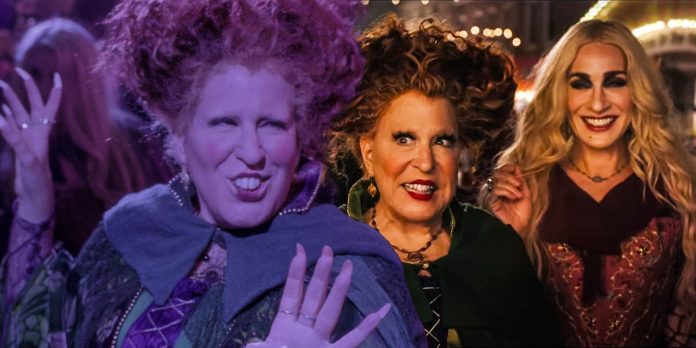 The first teaser trailer for Hocus Pocus 2 has been released, and although it doesn’t reveal too much, it perfectly demonstrates its best scene, reminiscent of the best scene of the first film. Walt Disney Pictures has been shooting a lot of films for decades, and also brought films for all holidays, and among the most popular is the 1993 fantasy horror comedy Hocus Pocus. Since one of the current trends in the film industry are sequels of films released decades ago, Disney decided to ride this wave by releasing a sequel “Hocus Pocus” under the simple title “Hocus Pocus 2”, which will reunite viewers with the Sanderson sisters for a new Halloween adventure.

Directed by Kenny Ortega, “Hocus Pocus” tells the story of the Sanderson sisters – Winifred (Bette Midler), Sarah (Sarah Jessica Parker) and Mary (Kathy Najimi) — three witches who were executed in 1693 for witchcraft and the murder of two siblings, Emily and Thackery. The Sandersons are responsible for Emily’s death, as they took her life force to stay young, while Thackery was cursed to live forever by a black cat. Before her death, Winifred cast a spell that resurrected her and her sisters during the full moon on Halloween, when a virgin lit the flame of a black candle, and centuries later, in 1993, a teenager Max (Omri Katz) inadvertently resurrected them. To continue living after Halloween night, the Sanderson sisters start looking for a child who will absorb their youth, and they have their eye on Max’s younger sister, Dani (Thora Birch).

Related: Hocus Pocus: How the Sanderson Sisters Survived when They were Burned

Although Hocus Pocus was initially met with mixed reviews by critics and failed at the box office, over the years it has become a cult and has become a public favorite, largely due to the many annual broadcasts on the Disney channel. Hocus pocus has now become a cult classic, and although it has various memorable scenes, lines and characters, one of its most popular moments is the musical number “I Bewitched You” performed by Winifred. So, the first teaser for “Hocus Pocus 2” showed the return of the Sanderson sisters, and at the very end the man tells them that they are probably “looking for a scene”, to which Winnifred replies “always!”, thereby setting up another big musical number, as in the first film.

When Max, Dani and Allison (Vinessa Shaw) try to warn Max and Dani’s parents at a party about the Sandersons’ return and their plans, Winifred takes advantage of Max coming on stage and telling the audience about them, and starts singing “I Put a spell on You”, with the aim of bewitching the whole room to get to Dani, and then to as many other children as possible. While Winnifred sings, Max, Dani and Allison continue to try to escape, especially since Billy Butcherson (Doug Jones) arrives, and they also try, but unsuccessfully, to make their parents understand that they should cover their ears. This musical number became one of the most popular scenes in Hocus Pocus, and since several musical numbers were confirmed in Hocus Pocus 2, Winifred said “always!” at the end of the teaser, it is implied that there will be a new version of the popular musical number from the first film.

Of course, it is unknown whether the big musical number “Hocus Pocus 2” will be an original song or another cover, but given the popularity of Winifred’s version of “I Bewitched You”, the musical number of the sequel may turn out to be the best scene of the film. . High hopes are pinned on Hocus Pocus 2, given how popular the first film is, and although it seems to have been given a darker tone, it will undoubtedly retain some of the elements that made Hocus Pocus such a favorite film, as well as the Sandersons’ sense of humor and their musical abilities.

BTS is ready for the GRAMMY! Reveal spoilers of their presentation