Home Entertainment The theory of the saga of the genius Skywalker Obi-Wan Kenobi reveals... 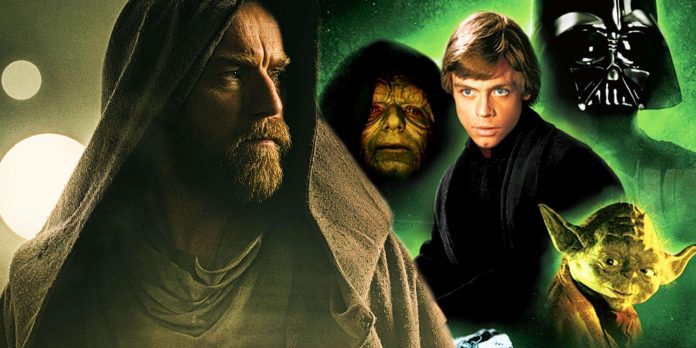 A genius theory stating that Obi-Wan Kenobi is following the structure of the Skywalker saga reveals how the story of the highly anticipated finale will play out. Obi-Wan Kenobi sees the return of Ewan McGregor to the titular role for the first time since Star Wars: Episode III – Revenge of the Sith. With the series comprising six episodes, the theory of how the show follows the original six Star Wars movies has begun to ring truer and truer the longer Obi-Wan Kenobi goes on.

In true George Lucas fashion, this is almost poetic given the return of so many classic Star Wars actors for the series. From McGregor reprising his role as the titular Jedi master to the return of Hayden Christensen as Anakin Skywalker/Darth Vader and Jimmy Smits as Bail Organa, Obi-Wan Kenobi is harkening back to the days of George Lucas’ Star Wars. This makes the theory that Obi-Wan Kenobi’s episodes and the Star Wars movies follow the same story even better.

Outside of linking episodes 1-5 of Obi-Wan Kenobi with the first five chronological episodes of the Skywalker saga, this fascinating theory also acts as a good indicator regarding how the series finale will play out. Given the importance of the show tying into the larger Star Wars canon, many have been wondering exactly how Obi-Wan Kenobi will end. If this theory in question is anything to go by, the Obi-Wan Kenobi series finale will play out very similarly to a classic Star Wars movie, Return of the Jedi.

Obi-Wan Kenobi episode 1 bears a lot of similarities to Star Wars: Episode I – The Phantom Menace. From the focus on the desert planet of Tatooine, Kenobi wanting to train Luke, and Luke himself growing up in the desert dreaming of podracing, the similarities are clear to see. The Phantom Menace spends a lot of time on Tatooine, features Qui-Gon Jinn attempting to train a young Anakin, and shows Anakin being a podracer.

Related: Why Reva Was Left Alive By Vader & The Grand Inquisitor

Naturally, the similarities to the Star Wars saga found within Obi-Wan Kenobi don’t end there, with episodes 4 and 5 of the show reflecting elements found in both A New Hope and The Empire Strikes Back. The similarities with A New Hope found in Obi-Wan Kenobi episode 4 are arguably the strongest of the theory. For example, one of A New Hope’s main story threads follows Obi-Wan, Han Solo, Chewbacca, and Luke Skywalker infiltrating the high-security Imperial Death Star to rescue a captive Princess Leia. Obi-Wan Kenobi episode 4 includes Fortress Inquisitorius, another highly secure Imperial compound. In the episode, Kenobi infiltrates the Fortress so he can save a captive Princess Leia from the hands of Reva, the Third Sister. Another similarity between the two involves their respective endings. At the end of Obi-Wan Kenobi episode 4, Reva plants a tracker on Leia’s droid to lead the Empire back to the Path’s base. This is very similar to Vader tracking the Falcon to lead the Empire to the Rebel base on Hoth at the beginning of The Empire Strikes Back.

This theory is further bolstered with the similarities between this and Obi-Wan Kenobi episode 5. From the similar endings of Obi-Wan Kenobi episode 4 and A New Hope, the fifth episode of the Disney+ show emulates the opening of The Empire Strikes Back. The iconic film’s opening sees the Empire attacking the confined Rebel base on Hoth, with the Rebels needing to hatch a desperate escape plan. Eventually, Vader and his stormtroopers enter the base and narrowly miss the escaping Rebels. Obi-Wan Kenobi episode 5 features a similar attack on the confined base of Jabiim by the Empire. After a brief assault by other forces, Vader takes matters into his own hands and storms the compound. Upon entering, though, the Rebels and Kenobi escape from under Vader’s nose, emulating the opening AT-AT attack of The Empire Strikes Back.

With this in mind, Obi-Wan Kenobi episode 6 is very likely going to match up with Return of the Jedi, completing the theory and having the show perfectly emulate the original six Star Wars films. How this will happen is through the culmination of Kenobi’s character arc in the show thus far and how this is similar to Luke’s character arc in Return of the Jedi. In Episode VI of the Skywalker saga, Luke’s main journey is about solidifying his place as a Jedi by confronting his father and the Emperor. In doing so, Luke overcomes his past trauma, such as his duel with Vader in The Empire Strikes Back, which saw him lose a hand and confront the fact that his father is a Sith Lord. Luke, in turn, helps Anakin overcome his past trauma by helping him return to the light side of the Force and overcome the Emperor, the main evil of the Star Wars saga.

Obi-Wan Kenobi episode 6, then, will follow this arc in some fashion with Kenobi himself. The entire show up to this point has been about Kenobi overcoming his past and confronting what happened with Anakin to once again find his own balance within the Force. One thing that is known about Kenobi’s future in the Star Wars timeline, from the original trilogy and Star Wars: Rebels, is that Kenobi is much more balanced after the events of Obi-Wan Kenobi. Therefore, alongside the Skywalker saga theory, it only makes sense that Obi-Wan Kenobi episode 6 completes this arc and has Kenobi overcome his past trauma like Luke did in Return of the Jedi.

Related: Kenobi Insists Yoda Was Right About Leia In Empire Strikes Back

Another thing to note is that Return of the Jedi also included many Force ghosts in Anakin, Obi-Wan, and Yoda. It has been heavily hinted at throughout Obi-Wan Kenobi that his former master, Qui-Gon Jinn, will be instrumental in helping him come to terms with his past. Obi-Wan Kenobi episode 6, featuring Obi-Wan talking to Qui-Gon Jinn as a Force ghost, would not only pay off the set-up of seeing his character, but further solidify the theory that Obi-Wan Kenobi, and more importantly, the series finale, emulates the original Skywalker saga.