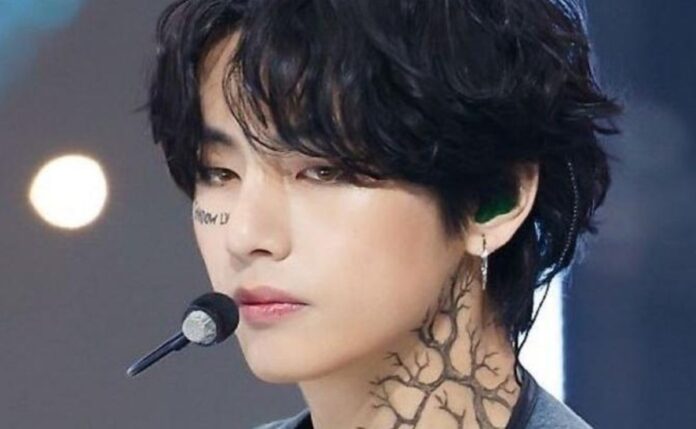 At the beginning of 2020, BTS surprised the world with the record production ‘Map Of The Soul: 7’, V fell in love with ARMY with a rebellious style, since he carried different temporary body tattoos, how did they capture the designs on his body?

People close to Taehyung stated that he is an artist who likes to get involved in every aspect of BTS’s comeback, from the music, outfits, style, concept, the creative process, and of course, his look.

The era of ‘Map Of The Soul: 7’ was no exception, the vocalist of the K-pop band showed a rebellious and carefree side with long hair, sets in basic colors, the special touch was given by unforgettable tattoos that he modeled on the part of his neck and on his cheek.

V stole the attention of the public and ARMY in the special presentations of ‘ON’, the easy expressions of him complemented his mysterious style and the tattoos of the idol took the social networks for the powerful aesthetic of him.

Through the BANGTANGTV channel on the YouTube platform, they revealed a video titled ‘The story behind V’s tattoos’, many artists collaborated to create the designs that he wore on the ‘ON’ stage.

The makeup artists and V worked as a team, he sat in front of a large mirror, supervised all the details of the design, the beauty professionals first marked the tattoo on his face, which said:

The interpreter of ‘Dynamite’ moved away and brought his body closer to the mirror to observe the result, he was very satisfied and they proceeded to seal the makeup so that it did not fade with sweat. The tattoo on his neck were huge dry branches that needed a little air to dry the ink.

ARMY did not hide his enthusiasm to know a little more about the creative process of the singer’s tattoos, in addition V showed a little of his chest, which melted the hearts of the followers.