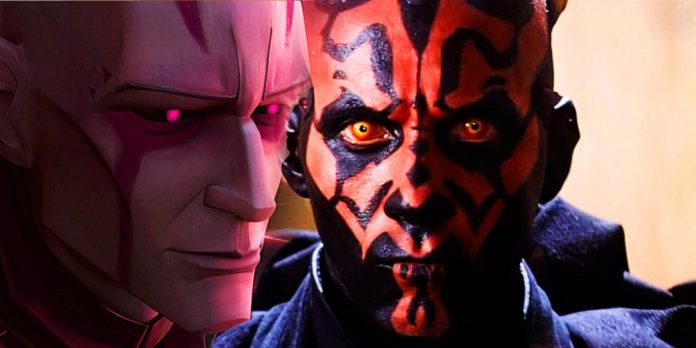 Star Wars: The Clone Wars brought Darth Maul back to Star Wars by simply saying he had survived being cut in half by Obi-Wan, but a Star Wars theory claims that there is more to this story. While much of the marketing for Star Wars: Episode I – The Phantom Menace revolved around the first Dark Side warrior audiences would see since Darth Vader, Darth Maul’s live-action role ended up being short-lived. Maul was the main villain in The Phantom Menace and delivered the Star Wars’ iconic Duel of the Fates fight, but the character had almost no lines and was killed off at the end.

The Phantom Menace would not be Darth Maul’s last appearance in Star Wars – at least for those who watched Clone Wars. The 3D-animated series was meant to be a tie-in story filling the gaps between Star Wars: Episode II – Attack of the Clones and Star Wars: Episode III – Revenge of the Sith, but it grew bold enough to introduce characters and events that would have an impact the entire saga, including the return of Darth Maul. Taking many by surprise, Clone Wars revealed that Darth Maul had not died after fighting Qui-Gon and Obi-Wan and that he was now hidden on a distant planet.

However, there was never a solid explanation as to how Darth Maul survived. In Clone Wars, it’s said that Maul refused to die thanks to his hate for Kenobi and for Sidious and that the Dark Side helped to keep him alive. In order to better explain Darth Maul’s Clone Wars return, a fan theory (via Reddit) claims that he was either possessed by or had his soul combined with the Son of Mortis. The god-like Force-being that represents the Dark Side was introduced in Clone Wars prior to Maul’s return, and he would have enough reasons to seek a body in the real world after what happened in the Mortis arc. It is also interesting to notice that Sam Witwer, who voiced the Son in the Clone Wars Mortis episodes, also voiced Darth Maul on the show.

What Is The Son Of Mortis?

Clone Wars season 3 introduced what to this day is one of the most complex and controversial concepts in Star Wars: the Gods of Mortis. On a planet that seemed to exist outside of time and space lived the Daughter and the Son, Force-beings that embodied the Light Side and the Dark Side, respectively. Besides the two, there was also the Father, who was responsible for maintaining the balance between his children and, consequently, the balance of the Force.

However, the Son of Mortis was not keen on playing by his Father’s rules. Not only did the Son no longer respect the Father, but he also wanted to escape into the tangible world – which was strictly forbidden. The arrival of Anakin, the Chosen One, made things even more complicated, and the Son almost managed to corrupt Skywalker. After causing the deaths of both the Father and the Daughter, the Son was finally stopped by Anakin before he could cause problems in the real world.

Although Star Wars is fairly familiar with characters surviving what should be lethal moments, the explanation Clone Wars came up with to justify having Maul on the show came out as forced. However, the fan theory connecting Maul to the Son of Mortis can offer a much better reason for Maul having survived. Very much like the Daughter did to Ahsoka at the end of the Mortis arc, in which the Force-being passed on her life-essence to save Anakin’s padawan’s life, the Son could have transferred his life-essence to Darth Maul right after the fight with Obi-Wan.

Related: Star Wars: What If Ahsoka Had Joined Maul At The End Of Clone Wars?

While it is assumed that Anakin killed the Son back on Mortis, the exact moment when Skywalker gives the final lightsaber blown is never shown. It is possible that, just before being killed by Anakin, the Son transferred his essence or even part of his consciousness to the body of a powerful Dark Side warrior – in this case, Darth Maul. Given how Maul was on the verge of death, it would be easier for the Son to take over his body. That said, Maul still had agency after his return, meaning that the Son’s takeover might not have been fully completed. Either way, being embodied by a Force-being like the Son would explain how Maul managed to survive being cut in half.

How Darth Maul Being The Son Explains His Clone Wars Changes

The Darth Maul in The Phantom Menace and the Darth Maul that Clone Wars followed from season 4 onwards are very different characters. While Maul did not get enough screen time in the first of the Star Wars prequel films for his personality to shine through, the then Sith warrior was nothing more than a pawn to his master Darth Sidious. Maul would not say a word without Sidious’s permission, and all his actions depended on his master’s plan.

That is why it is curious how independent, eloquent, and tactful Maul had become after his return. For someone who had been brainwashed to a certain degree and had spent his entire life just as a henchman for the Sith, Darth Maul’s change in Clone Wars was very abrupt. However, on the assumption that this fan theory is right, it would make a lot of sense for Maul now to be so different as there would be another spirit embodying his body.

The Son of Mortis had larger-than-life aspirations, was always preaching his philosophies, and would go on in lengthy speeches just like Maul started on to do in Clone Wars. In fact, Maul even repeated an exact line used by the Son: “The chains are the easy part; it’s what goes on in here that is hard” – a reference to the Sith Code. While the Sith Code itself may have been known to many, including the Son, the fact that Maul used the same expression as the Mortis God is quite curious.

Another interesting Darth Maul change after his “death” is how he no longer defined himself as a Sith and was much more aware of how gray things really were. Maul knew that if Sidious’ plan worked, there would be no more balance in the Force, and he was willing to do anything to make sure his former master did not succeed. He now also had a particular interest in Ahsoka, who was connected with the Daughter’s spirit and even asked her to join him. If Maul was now really a mixture of his old self with the Son of Mortis, that would explain his connection with Ahsoka, his better understanding of the concept of balance, and his overall arcs in Star Wars: The Clone Wars and Star Wars Rebels.