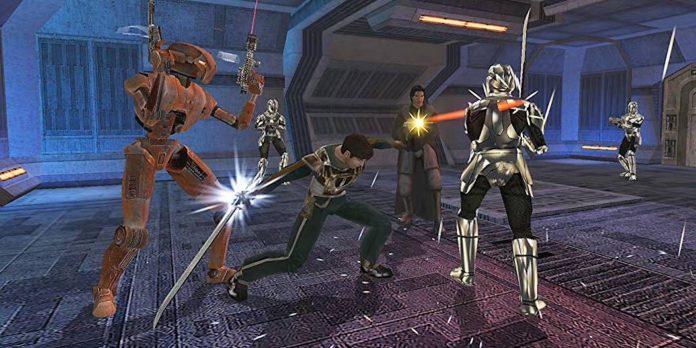 The critical bug of Star Wars: Knights of the Old Republic 2, due to which players could not complete the game on the Nintendo Switch, has finally been fixed. The sci-fi role-playing game is a sequel to the first KOTOR, in which players embark on a brand new quest across the galaxy to gather the last surviving Jedi to confront the Sith. Star Wars: KOTOR 2 was released on the Nintendo Switch last month, but players, unfortunately, could not pass the port due to a critical error.

Like its predecessor, Star Wars: Knights of the Old Republic 2 is a real–time role-playing game in which players can assemble a squad of loyal comrades, explore the ways of the Force and explore a galaxy far, far away. While the combat is basically the same as in the first game, KOTOR 2 innovates by adding new companions to recruit, new exotic planets to discover, and a list of deadly Sith to defeat. Although the release of the game on the Nintendo Switch was long-awaited, the launch of the port was overshadowed by a constant error, due to which players could not go beyond the first half of the story. The KOTOR 2 Nintendo Switch bug caused the game to crash whenever players visited Onderon and triggered the Basilisk Crash cutscene, but this issue has apparently been fixed.

According to Aspyr, the developer of the Star Wars: KOTOR 2 port for the Nintendo Switch, the bug that caused the Onderon game to crash has now been fixed. This means that players can safely venture into the lush jungle world and activate the Basilisk Crash cutscene without crashing out of the game. This, in turn, means that Nintendo Switch players will finally be able to complete the game without crashing into a wall halfway through. The Aspyr fix also fixes other less noticeable issues, such as crashes occurring on Dantooine and Korriban, along with loading screen looping.

Today we released a fix for STAR WARS: Knights of the Old Republic II: The Sith Lords, which fixes several known problems. You can find the full information here: https://t.co/Ey5hztUDvX

Nintendo Switch users can now play Star Wars: Knights of the Old Republic 2 without worrying about the crash of the Basilisk, and the KOTOR remake for PS5 will soon allow players to experience a modern version of the original game. Although little is known about the upcoming remake, it is expected that it will remain true to the vision of the original game, but at the same time adapt the gameplay and plot for a new generation. The constant in-game Sith lord Darth Revan has become a favorite Star Wars character, and fans are undoubtedly looking forward to seeing the masked figure come to life with the help of PlayStation 5 equipment.

Star Wars: Knights of the Old Republic 2 is a favorite part of the sci—fi saga, which features a number of memorable planets and powerful Sith lords. While most Nintendo Switch players unfortunately couldn’t get past the game, the Aspyr patch finally lets you get past Basilisk Crash. Those who play KOTOR 2 on the Nintendo Switch can now safely head to Onderon and experience the rest of the sci-fi epic.

Explanation of the Outriders Ending: Worldslayer

You: Season 3 Will Have Insane Episodes, Promises Producer