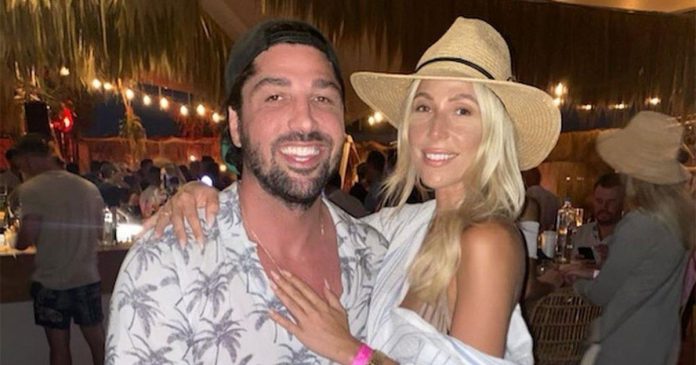 Love after pods! Shaina Hurley married Christos Lardakis after a stormy journey in “Love is Blind”.

Couple “love is blind”: who is still together, and who broke up?

According to TMZ, the couple got married on Saturday, July 2, at the courthouse in Chicago, in the presence of a close friend and Lardakis’ daughter as witnesses. The publication has received photos from the modest ceremony and reports that they plan to exchange vows in Greece later.

Hurley began dating Lardakis after breaking off her brief engagement to Kyle Abrams in the second season of the series “Love is Blind,” which aired earlier this year. On March 2, the reality TV star revealed her relationship, and two weeks later announced her engagement.

“He was great throughout the whole situation. I’m happy,” Hurley told Viall Files at the time.

From capsules to weddings: behind-the-scenes rules of “Love is blind”

Further, the hairdresser told about her relationship with Abrams, admitting that she regretted accepting his offer in capsules.

“Because even before he proposed, I thought:”I don’t know how it’s going to work”… I tried to be open—minded because it’s an experiment,” she told Nick Viall. “It’s been about 10 days — people behave as if it’s been years. … During the disclosure, I had [such] intention, [then] I thought, “You know what? I do not know if we should do this.” And when I saw him, I thought, “Oh, my God, this is real.”

When the reality TV couples went to Mexico after getting engaged, it was shown that Hurley was leaving without warning.

“I wouldn’t leave him in Mexico. Unfortunately, why I left, it wasn’t on the tape, so they couldn’t show it,” she told Viall. “I was very honest with Kyle and told them, ‘I can’t do this.’ I broke up with him for a reason. And I explained it to him in Mexico, and I wanted to go home. I was kind of over it at that moment. And I just needed to see my family again, for example, we couldn’t see them for about three weeks, so there was no outside influence on me.”

Abrams, for his part, told Us Weekly about the role religious differences played in their breakup.

“I thought I was giving a lot. These are things that [on] normal dates I would immediately write off from her,” he said in February. “The first time I gave up. So I thought maybe she should, too. I thought it was mutual, but it doesn’t seem to be.”

Abrams later admitted that he would like to propose to Deepti Vempati instead of Hurley. Since then, the two have been reticent about their relationship.

“All I can say is that we are going through this. We’re just figuring it out,” Vempati told Us in June. “I think you guys will see more of our story later. [Kyle] is one of my best friends, so that’s all I can say.”

The image of the James Webb Telescope looks like a Skyrim...