Home Entertainment The star of the third season of the TV series “Evil” talks... 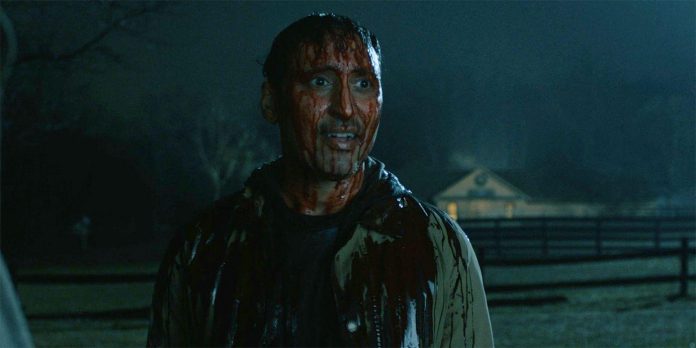 The star of the third season of “Evil” Aasif Mandvi recalls his worst experience on set. As contractor Ben Shakir, Mandvi has to play one of the quietest roles in the Paramount+ series. He’s not Catholic priest David Acosta (Mike Coulter) struggling with his faith. He is not Dr. Kristen Bouchard (Katya Herbers), who constantly confronts the evil troll Leland Townsend (Michael Emerson). Ben, for that matter, is often the devil’s advocate. He turns to science and tries his best to patiently and calmly explain what might otherwise seem incomprehensible.

But that didn’t stop Ben from getting his share of the harrowing experience. A memorable episode of the second season of “Evil”, which is one of the best examples of how disturbing supernatural drama can be, shows Ben trapped on the floor of an abandoned hotel. There is no reliable cellular connection, and a potentially malicious elevator is not working. Throughout the episode, Ben has to contend with the fact that he can slowly die, and no one will even understand where he went. The character is eventually saved by David and Kristen, but not before he has to face his mortality directly. Ben gets into another dangerous fiasco in the season 3 episode of “Evil” “Demon Cults” when Mandvi gets into a scene, straight out of Midsomer.

During an interview with ScreenRant at Comic-Con 2022 in San Diego, Mandvi details how uncomfortable it was to shoot the climactic scene of the episode, in which Ben is covered in goat blood. A former correspondent of the Daily Show talks about how they filmed a scene at two o’clock in the morning in the middle of a field and poured fake blood over it. In his quote, which you can read below, Mandvi describes in detail how he was doused with a mixture of red dye, sugar and syrup.

“There was a scene in [Demon of Cults] that I had to shoot where I was doused with goat’s blood. He was shot at two o’clock in the morning in the middle of the field, and I was literally [doused]. The substance they use is clearly not goat’s blood. It’s some kind of weird mixture of sugar, syrup and red dye or something like that, and it was in my ears and in my eyelids.

If you could imagine that your whole body is just covered in some kind of maple syrup. Just in my underpants… It was terrible. It was the worst feeling and we were there for about three hours. And it was very cold, so he stuck to me. I was like a caramel apple.”

By all accounts, this experience seems as unpleasant for Mandvi as it is for the character he portrays. Ben is being dragged into some kind of ritual sacrifice because he wants to impress a woman he likes. Naturally, before the third season of “Evil” ends, Ben will be at the center of the sacrifice. For a moment, it seems that the contractor may face childhood injuries or be killed by a manic cult. After all, it’s a poor goat being cut up, and as Mandvi describes in detail, this supposed goat’s blood ends up all over Ben.

The whole setup leads to one of the best climaxes in the entire season of Evil 3, when Ben goes out to meet Kristen and David. His friends are here again to save him. Only this time they don’t need it. He tells them in detail about his ordeal and, stunned, blames religion for it. This is a simple, fact-based explanation that is difficult to understand due to the fact that viewers are aware of Ben’s deep-rooted skepticism about everything related to faith and spirituality. This completes Mandvi’s outstanding performance. But judging by the sound, he probably wanted there to be a little less blood.

Joker is coming to the beloved game as a guest character!

Matrix Resurrections: Director Explains Why Neo and Trinity Are Resurrected