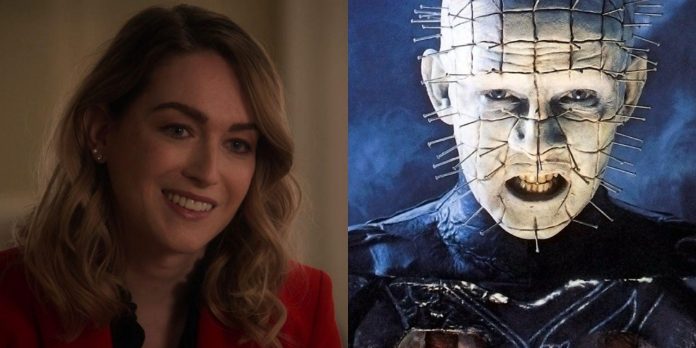 Earlier this week, the first teaser for the relaunch of Hellraiser was released on Hulu, which will premiere on October 7, giving viewers a brief overview of the pleasures and pains waiting to come out of the infernal puzzle box. Offering a 15-second glimpse of Pinhead in the background as the musical crescendo builds and “Hellraiser” scrolls across the screen, it was hard to get a full picture of actress Jamie Clayton as the reinvented Cenobite.

Now the Sense8 actress has taken to Twitter to post the first clear image of her take on the iconic character originally played by Doug Bradley. Entertainment Weekly also unveiled the image along with a new Cenobite known as The Masque.

David Bruckner led the reboot of the 1987 genre film. Bruckner previously worked on the films “Night House”, “Ritual” and “V/H/S”. Hellraiser is based on Clive Barker’s novella The Hell-Bound Heart, and the original film was also written and directed by Barker, and it shows sadomasochistic cenobites released to Earth when young Kirsty’s equally sadomasochistic uncle Frank summons them using a mysterious puzzle box. Kirsty is trapped in hell on Earth, as her Aunt Julia also becomes a victim of the box, and the Cenobites demand Kirsty’s eternal torment.

In the reimagining, a young drug addict struggling with compulsive behavior, Riley, played by Odessa A’zion, stumbles into a box and unknowingly becomes the center of the Cenobites and their unholy carnal pleasures. Actress Jamie Clayton will take on the role of Pinhead, the leader of the Cenobites, and you can take a look at the new character design in a tweet from the actress below.

The image gives the first clear look at the character’s redesign, still retaining the character’s shaded head with nails, as well as sunken black eyes and a splayed open throat showing some kind of mechanical element. Not wanting to copy Bradley’s iconic performance, Bruckner went knowing they wanted Pinhead to be a woman in this version, and Jamie Clayton won the role. This decision caused a negative reaction from some fans of the franchise, who, due to nostalgia and /or sexism, expressed their dissatisfaction with the trans woman chosen for the role. However, these fans seem to have overlooked the transgressive nature of the source material.

The original Pinhead Doug Bradley himself spoke about this decision at Silver Scream Con, stating: “This is an interesting casting decision. Well, it’s not that far away. We say “feminine Pinhead” as if we know what it means, but there are a million shades of femininity. Where exactly are they going to go with this?

Along with the unveiling of Clayton’s Pinhead, the first images of the new Cenobite The Masque were shown, a figure that appears to have been stripped off and has only a flat skin mask instead of a face, which is held in a frame where his head should be. Bruckner also teased that Pinhead would be joined on Earth by more new cenobites. Bruckner directed the film with regular co-writers Ben Collins, Luke Piotrowski and David S. Goyer, who wrote the screenplay. The cast also includes Adam Faison, Drew Starkey, Brandon Flynn, Aoife Hinds, Jason Lyles, Yinka Olorunnaif, Selina Lo, Zachary Hing, Keith Clark and Hiam Abbas. “Hellraiser” debuts on Hulu on October 7.