Home Entertainment The star of “Harry Potter” recalls the filming of the key scene... 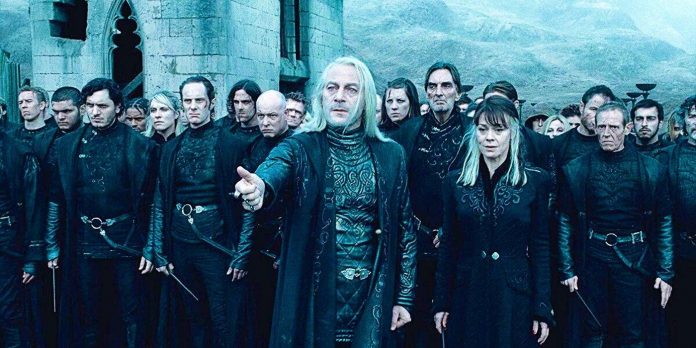 Jason Isaacs is reflecting on making one of Harry Potter and the Deathly Hallows: Part 2‘s most pivotal scenes. Directed by David Yates, the final installment in the highly successful film series premiered in 2011 and continued to follow its titular wizard on his mission to find and destroy Lord Voldemort’s Horcruxes in order to defeat him for good. Isaacs appeared as Lucius Malfoy in five of the ten movies, being introduced in The Chamber of Secrets as a Death Eater and one of the franchise’s main antagonists who aided in Voldemort’s return and efforts to conquer the wizarding world.

Fans of both the films and J.K. Rowling’s collection of novels recall that one of the most significant moments in Harry Potter’s story is the Battle of Hogwarts. As Harry sought one of the final Horcruxes, Voldemort summoned the Death Eaters and all of those who swore loyalty to him and attacked the school grounds, resulting in the apparent death of Harry after he surrendered. When it was revealed that Harry was alive, many of the Death Eaters, including Lucius, left Voldemort’s side but remained present for their final duel, in which Harry ultimately defeated the evil wizard.

Related: Harry Potter: Every Battle Of Hogwarts Death (& How They Fell)

Now, in speaking with The List, Isaacs has looked back at his time in the Harry Potter franchise and revealed that one of his favorite moments was during the filming of the Battle of Hogwarts. He explained that the shoot went on for a long period of time due to rain, noting that a lot of the crew would sit in a large tent on set. He also described drinking tea, sharing stories, and watching Ralph Fiennes deliver his monologue as Voldemort. Read Isaacs’ full quote regarding this memory from The Deathly Hallows: Part 2 below:

“I was in, 2, 4, 5, 7, [and] 8. I was in five of them spread over 10 years. My memory’s all of it. My strongest memories are at the end because I’m old. I remember the first day vividly and I remember the last bit. The middle decade is slightly blurry, but I remember when we were shooting the big courtyard sequence at the end, the big battle of Hogwarts [in “Harry Potter and the Deathly Hallows Part 2”] … because it went on for quite a long time because it rained, so we couldn’t shoot. We’d go to work every day and we’d sit about. If it was an American film, people would go back to their trailers, but it wasn’t an American film, so we all sat in a big tent with a tea urn full of increasingly solid tea, which the spoons would stand up in, waiting for the tin of biscuits at 11 o’clock to come around, huddled around the heaters.

It was very cold, listening to Julie Walters tell stories about her pig farm and laughing like idiots, and telling filthy showbiz anecdotes to each other. I wanted the rain to go on for months. I wanted it never to end … I also remember standing there, somebody, could have been the late, great, brilliant and hilarious Helen McCrory, going, “I don’t know how you’ve f***ing taken this for 10 years. I can’t tell you.” We were standing there for days and days watching Ralph [Fiennes] do his monologue as Voldemort, because [many of] the “Harry Potter” films were [shot] perfectly by David Yates. I think he was given a mandate by Warner Brothers: “These films will be around forever. Let’s make them perfect.” We filmed from every angle, every size, got it right.

It was days and days, we were standing there watching Ralph. We were all like, “Get on with it.” Not that he wasn’t doing it brilliantly, but we’d now seen the speech a thousand times. I was feeling a bit sorry for myself, because I had three lines over the next week. I looked over in one corner and there was Jim Broadbent with an Oscar and Emma Thompson, and I can’t remember who with an Oscar, Judy Walters with an Oscar, Maggie Smith with an Oscar. I thought, “They haven’t got any lines. I can’t believe how lucky I am. At least I’ve got three lines,” and it suddenly perked me up for a while.”

It might be hard to believe, considering his fondness for making the films, but Isaacs did not want to play Lucius Malfoy initially. The actor has talked in the past about auditioning for Gilderoy Lockhart and almost turning down the role of Lucius upon getting the offer. However, he has also continued to say that he is glad he got the part, explaining in this recent interview that he loved working with his fellow stars and that “none of [them] took it for granted.”

The Harry Potter movies have proven to be just as successful as the books and a large part of that can be credited to the talent involved, so it is always nice to hear that cast members enjoyed the filmmaking process despite the fact that it sounds particularly arduous considering the conditions. Isaacs is not alone, of course, as other stars recently shared some of their memories during Harry Potter’s 20th Anniversary: Return to Hogwarts. After seeing stories like Isaacs’, fans will surely fall more in love with the series and feel compelled to rewatch Harry Potter and the Deathly Hallows: Part 2 for that battle scene alone.

Matrix 4: Keanu Reeves is Back As Neo in New Teasers

Disney responds to rumors about the trailer for “Black Panther 2”