Home Entertainment The “Sprunk vs eCola” event in GTA Online includes a $300,000 GTA... 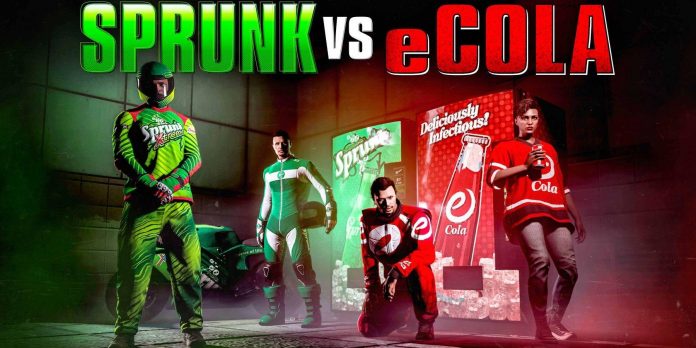 GTA Online often offers updates that add new content, weapons and cars to the game. The latest introduction is a new event in which two iconic drinks of the game are pitted against each other, and players who participate can walk away with a large cash reward in the game.

Sprunk and eCola are two drinks in GTA Online that can usually be bought at vending machines. While many players probably haven’t thought about it, GTA Online now challenges players to determine the best drink.

The latest GTA Online event has already entered into force, and players can already benefit from it. Players must choose a side in the event, which can be done by joining the Sprunk or eCola team on the official Social Club GTA Online website. From there, the game will calculate how many cans of the selected team’s drink the player has drunk. Voting will also be counted for getting a free GTA Online jumpsuit based on the player’s team.

The duel for the best soda will take place for three weeks, and Rockstar Games will count the votes on September 14. For the duration of the event, both Sprunk and eCola are free, so players do not need to spend a cent on the order of participation. Sprunk can also now be stored in users’ inventories like eCola, so players can use them to restore health on the go and earn points for their team in the process. It should also give players an extra boost when joining high-difficulty heists or missions where items are needed to restore health.

Meanwhile, coloring pages for Sprunk and eCola cars are free for a week, as are melee weapons, green and red smoke for vehicles, and Declasse Hotring Sabre is free with the included eCola x Sprunk coloring book. After the event is over and the votes are counted, Rockstar Games will award all GTA Online players 300,000 GTA dollars, a hat, a university jacket and a parachute bag, the design of which is based on the winning drink.

Making money in GTA Online has become easier than ever, especially after the introduction of private lobbying missions and invitation-only commercial sales. However, new items are also regularly added to the game, which can easily empty a player’s wallet in no time. The newly added Grotti Brioso 300 Widebody costs $1,195,000 when launched from scratch, so a $300,000 GTA bonus could help cover some of this or any other purchase that players have recently considered.

Halo Infinite: The First Tech Test Will Show How The Battle...

Street Fighter 6 Reveals the Theme music for Yuri and Kimberly