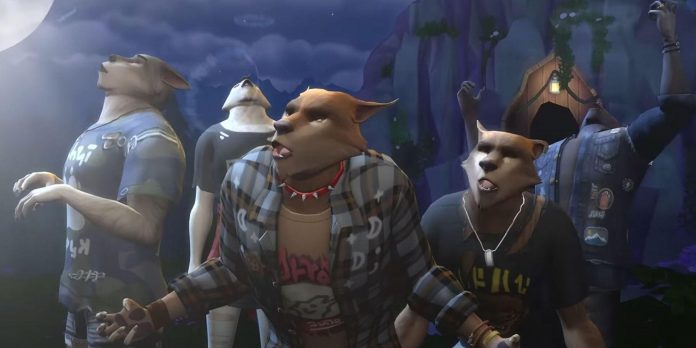 The Sims 4 player discovered that the new werewolves in the game have a common and disgusting habit with real dogs. The newest occult addition to the popular simulator title, Werewolves in The Sims 4, became a reality earlier this month with the release of the Werewolves game set. Since then, players have discovered all sorts of entertaining quirks and small details about lycanthropes.

The Sims 4: Werewolves brought a lot of new supernatural details to the game world, including a lot of knowledge about these species and a lot of unique interactions focused on werewolves. Some of these involve the ongoing feud between werewolves and vampires, allowing the duo to fight supernatural battles, and also include new mudlets that involve them hating each other. Others rely on the inherent dog nature of werewolves, and new actions of sims become available in the game, such as eating cattle and howling with dogs.

Link: Everything you need to recreate Twilight in Sims 4

Reddit user skyemu has discovered a hilariously disgusting werewolf detail in a new game set. When the player chooses a dirty, filled cat tray, playing as a werewolf, there is an opportunity to “absorb”. It seems that dogs are involved in disgusting activities in real life, werewolves are doing it in the Sims 4 world. The user calls the detail what “finally broke” them, referring to the absolute absurdity of the small detail.

Most fans found that the latest Werewolves game pack significantly exceeded the expectations of the players. Although it’s not a perfect set, its large amount of knowledge, lycanthropic abilities, new actions and small details have made it an outstanding game package for many. This latest inclusion may well be another example of a fun Easter egg included by the Sims 4 developers in the Game Pack, although this is not necessarily the case. Werewolves in The Sims 4 have an ability that allows them to eat items to satisfy their hunger. The same “devour” parameter is present for almost every object for werewolves with special powers, which means that this may not be a specific reference to the fact that dogs often eat excrement in real life — it may just be an edible blanket option applied. to the trash bin object.

Regardless of whether the devouring tray was intentional or not, the fact that it’s an option at all is a testament to how the unique werewolf abilities included in the game come to life. The Werewolves game set perfectly combines serious knowledge with more silly elements, giving players a lot about the history of lycanthropes and the tragic history of some game inhabitants, as well as offering options such as tug of war by a werewolf and edible items to stay consistent. with the carefree, cartoon character of The Sims 4. While not all players may be fans of occult gameplay, unique and fun details like this may inspire some new players to try out as werewolves.