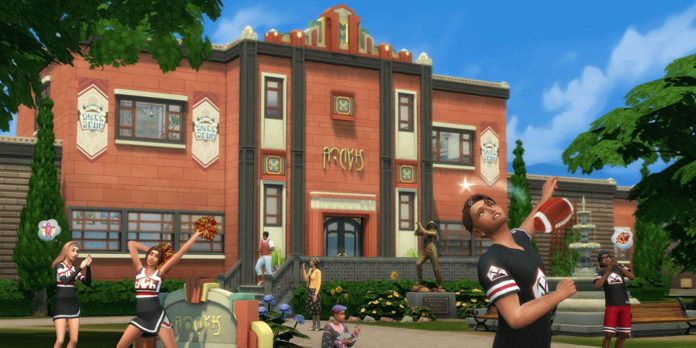 A leaked map from the Sims 4 High School expansion pack seems to showcase a ton of content in the city of Copperdale. The upcoming DLC will focus on Sim’s teenage years, allowing him to enter high school and participate in youth activities. The Sims 4 High School Years expansion pack will be released on July 28, but the new DLC world map was allegedly revealed in advance.

The Sims 4: High School Years, which was first announced earlier this month, will take players to the vibrant city of Copperdale, where they can have fun in a teen role-playing game. Players can register their teenage Sims at Copperdale High School, where they can engage in activities such as attending classes and taking extracurricular sports. Copperdale also promises to provide players with unique places to explore, including a popular dating site for teenagers called Plumbite Pier. To capture the youthful energy and authentic school experience, High School Years will also bring a new fashion to the game. Depop clothing in Sims 4 will allow players to dress their teenage Sims in modern outfits designed by real sellers from the digital market site.

Related: The “Everything in High School for Sims 4” Expansion Pack

The Copperdale map from the upcoming Sims 4: High School Years expansion has apparently leaked online and is being distributed online. The world map of the add-on, which has two separate areas separated by a large lake, was shared by both Reddit user NeoHippie87 and Twitter user A8gu293j. The leaked map features 13 attractions scattered across an impressively large area, with the Copperdale School prominently at the top of the map. The new area that appeared in The Sims 4: High School Years has not been officially unveiled, so this leak is just a rumor, although fans seem to agree that the Copperdale map does look authentic.

Along with a new large map and exciting new actions, High School Years will add fashion-related likes and dislikes to the Sims 4 role-playing game system. This mechanic will support Depop clothing options in expansion, allowing each Sim to evaluate outfits and form a special sense of style. The likes and dislikes system will add even more opportunities for role-playing games in The Sims 4: now each Sim will have a unique sense of style in addition to other character traits.

The High School Years expansion promises to refresh Sims 4 by focusing on young love and teenage life. The DLC will allow players to immerse themselves in the vibrant city of Copperdale, and the leaked map of the city suggests that it will be a really reliable place. Although this map has not been officially unveiled, fans are undoubtedly looking forward to exploring the shops and rivers of Copperdale when The Sims 4: High School Years is released on July 28.

Slapgate 2.0? Twitter Urges People to Stand Up to The “Fresh...