Home Entertainment The showrunner of Strange New Worlds explains the reference to the TOS... 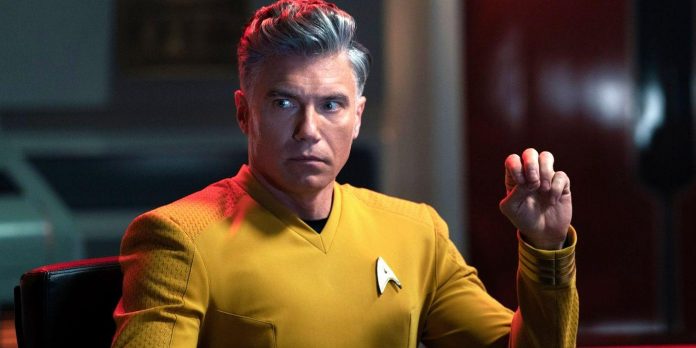 Warning! Spoilers for the finale of the first season of the series “Strange New Worlds” below!

“Star Trek: Strange New Worlds” showrunner Akiva Goldsman recently explained the reference to the finale of the first season of “Star Trek: The Original Series.” The events of Strange New Worlds, set five years before The Original Series, follows Captain Christopher Pike (Anson Mount) and his crew on the USS Enterprise before Captain James T. Kirk takes command. After the rebranding of the sci-fi franchise conducted by Alex Kurtzman, “Strange New Worlds” adopted a classic episode structure, which helped the series become the most popular part of “Star Trek” on Rotten Tomatoes.

In the finale of the first season, Captain Pike faced an alternate version of himself, who managed to escape his terrible fate by saving the lives of doomed teammates. However, Future Pike has shown that his actions have terrible consequences for the universe as a whole. He is then transported to the future, where his paths cross with Captain Kirk (Paul Wesley) during the events of the popular episode of the original series “Balance of Horror”. In the original 1966 episode, Kirk and the USS Enterprise fight the Romulan warship Bird of Prey, resulting in the destruction of the enemy. However, when Pike overcomes his fate in an alternate future, he tries to engage in diplomacy, which leads to a catastrophic war in which millions will die.

In a recent interview with Deadline, Goldsman addressed the reference to the final season of the 1st season of the series “Strange New Worlds”. The show’s writer and co-creator explained that because of the show’s chronology, as well as its narrative structure, they felt they had to be connected to the progenitor of the franchise. Read what Goldsman said below.

Well, obviously we’ve always rubbed up against TOS, not just when it comes to chronological continuity. We’ve done a lot to identify with TOS, and it’s the episodic nature of the narrative and the genre leaps we make.

So it seemed that the crossroads owed, at least, to ourselves. Very early on, we thought, “Well, how are we going to do this? Are we going to do this?” And you know, the episode “Balance of Horror” is a classic moment in the film “Track” about society. So who’s the other one? What does the other one look like? The other us? How can we, dare I say, not alienate those who are different? How do we repel those who are different, you know? Everything that Roddenberry talked about, which is really tragically the same, is at least equally relevant today.

So, you have a “Balance of Horror” as an independent object. It feels like a tipping point for our stuff as well, and so we thought, “Well, this is kind of a fitting and exciting opportunity,” and so we went.

According to the producer, the transition to The Original Series was something they felt they had to do. Choosing “Balance of Horror,” an episode considered by many to be one of the best in the original series, as an intersection point was a good choice because it offered nuances of Pike and Kirk’s leadership style. As a result of Pike’s tendency to seek a more diplomatic solution with the Romulans, millions and millions of creatures will eventually be killed in an endless war.

Morbius Is Against. Minions: how do memes affect the success of...

Genshin Impact: What is Fontaine?