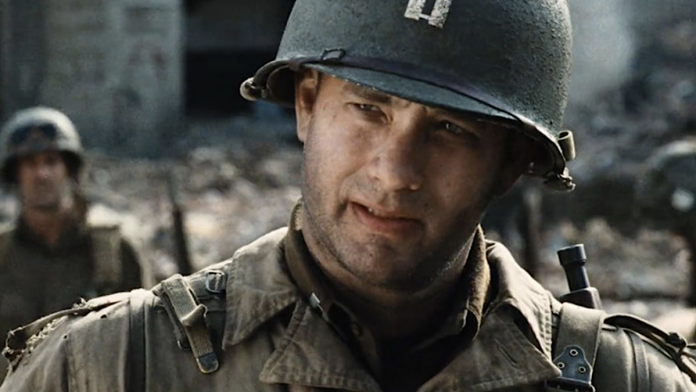 I am sure that most of us still remember our inner reaction to the first shots of Steven Spielberg’s masterful drama about World War II, “Saving Private Ryan.” As soon as the film fits into the narrative framework, Spielberg transports us during the D-Day invasion on the beaches of Normandy, and we begin to feel like members of a battalion that follows Tom Hanks and his soldiers into battle. It’s exciting and devastating… and it had a similar effect on the men who filmed this episode so we could watch it on the big screen later.

Over the years, we have argued in favor of CinemaBlend that “Saving Private Ryan” is the best film by Steven Spieberg and the best film by Matt Damon. It is more difficult to include him in the list of the best Tom Hanks films, because he has starred in many cold-blooded classics. However, going on the ReelBlend podcast to discuss his new movie “Elvis,” Hanks recalled the shocking moment when he realized that “Saving Private Ryan” would be something extraordinary. As he recalled:

It was filmed geographically, in real time. We took off on a landing ship. Then we were on the beach. Then I was in the water, pulling, pulling this wonderful guy, pulling him ashore. Then we were on the breakwater. Then we were outside the Belgian gate. Then we got up. We have been on this beach, I would say, on the beach itself, I would say, for three weeks. And the other guys, Vin (Diesel), Eddie (Burns) and Adam (Goldberg)… they hadn’t fired yet until we were on the shale. And in the middle of the first day, I looked, uh, there was an amputee actor in the frame, in the distance and in slow motion, looking back, raising his hand and looking forward. So I went upstairs. I walked up to the place where we were having lunch or something and said, “Guys. Guys. Hold on to your hats, man. You’re not ready for what’s happening down on the beach. This is crazy!’

He wasn’t exaggerating. The scene on the beach in “Saving Private Ryan” is confusing and frightening, because it intensely immerses the audience directly into the war and at every step reminds us that these were normal people who were not ready for the scale of the massacre. Veterans have talked about this episode, calling it one of the most realistic war films ever made. And Hanks attributes this to the approach that his regular collaborator Steven Spielberg brings to the material. When he talked about the Spielberg trial, Hanks understood how to connect it with Austin Butler’s work as Elvis Presley in the new movie “Elvis”, which Baz Luhrmann shot out of turn. Hanks explained:

Actually, Stephen doesn’t do much scouting or anything like that. He understood. He has all the equipment on the truck that you can imagine. And people to whom he can literally say three words mean that three pages of material need to be reported. In a movie like Elvis, Austin had to shoot part of the movie with me along with him. And then he had to go back to the same costumes, the same scenery, the same lighting when I wasn’t there. Because life intervened, and I said: “I can’t stay here for 19 months, Baz, until you figure it out!” (laughs)…It was hard for them. And what’s more difficult, you know? The shooting is geographical, so are you just as tired every step of the way? Or do you need to shoot a little and then come back?

You can enjoy Tom Hanks’ full interview on the ReelBlend podcast as part of this week’s show.

And now you can head to the movie theaters to see Tom Hanks play Colonel Tom Parker alongside Austin Butler’s Elvis in “Elvis.” We gave Elvis a solid review on the website, but it pales in comparison to the praise that the Presley family showered on the film. That’s really all Hanks and Butler (and Luhrmann) needed to hear. But judge for yourself, because Elvis is now open in cinemas!

Zazi Bitz is in talks to reprise her role in “The...