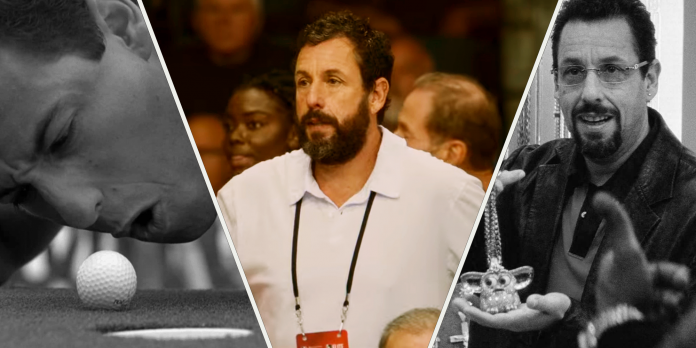 Netflix’s Hustle scored high enough to break three Adam Sandler movie records on Rotten Tomatoes. With more than three decades and 80 credits under his belt, Adam Sandler is certainly no stranger to acting in feature films. The fact that Hustle managed to break more than one record despite Sandler’s extensive history is a testament to the Netflix movie’s massive appeal.

Adam Sandler plays Stanley Sugerman, an underrated NBA scout who devoted his entire life to becoming an assistant coach of the Philadelphia 76ers. To fulfill his life’s goal, Stanley is tasked with finding a future NBA superstar. Arriving in Spain hoping to meet a potential player, Stanley attends a street game where he meets Bo Cruz (Juancho Hernangomes) for the first time. Together, Stanley and Bo return to the USA and face strong opponents, grueling training sessions and a lot of PR-related nightmares as their relationship outgrows the relationship between the coach and his player. Such a touching story with a healthy dose of tension rightfully deserved the wide praise it received on Rotten Tomatoes.

Hustle broke Adam Sandler’s records with both the public and critics. An outstanding audience score of 92% toppled its predecessor Happy Gilmore with 85% for the title of Adam Sandler’s highest-rated film. Critics also gave Hustle a certified fresh rating of 92%. While not the highest critical acclaim for any Adam Sandler film, this is the highest critical acclaim for any “Happy Madison” movie. As the founder and CEO of Happy Madison Productions, Adam Sandler should be proud of this achievement. Critics and viewers don’t often agree on ratings, and Hustle is one such exception. Being the only Sandler film to receive more than 90% of critics’ and viewers’ ratings, Hustle can easily claim itself as the most world-famous Adam Sandler film to date.

Hustle’s welcome reception from viewers and critics is a clear sign that Adam Sandler should continue to star in more mature films. Sandler’s portrayal of silly and serious moments provides the perfect balance between his familiar comedic image and irresistible dramatic side. His Stanley Sugerman is a loving father who doesn’t shy away from making a few dad jokes in front of his daughter and ridiculing Bo for his inappropriate hotel expenses. Stanley Sugerman is also a middle-aged man who decided to fight for his current happiness after giving up his original dream due to an accident caused by his own drunk driving. The high scores on Rotten Tomatoes show that this type of intricate character is widely loved, and they overwhelmingly support Adam Sandler taking every opportunity to play more complex roles like Stanley.

Adam Sandler’s character in Hustle has significantly raised the bar for his next role. With this film, he once again expanded his acting range and proved that his initial success in more intense films such as “Uncut Jewels” was not an accident. Whatever his next project is, if it’s anything like Hustle, then it’s something that both viewers and critics are looking forward to.