Home Entertainment The scene with Jeff Goldblum from the movie “Thor: Love and Thunder”... 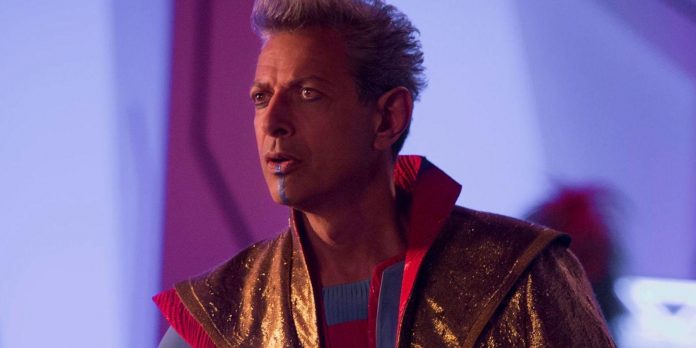 According to Taika Waititi and Chris Hemsworth, “Thor: Love and Thunder” left a lot of shots on the editing room floor, and it looks like some of them are related to Jeff Goldblum and his favorite grandmaster from “Thor: Ragnarok”.

Often illustrators, visual effects specialists and other artists working on MCU blockbusters tend to share their sketches and ideas on social networks. This is the case with Laurent Ben-Mimoun, who recently posted a matt art showing what was probably the Grandmaster’s cameo in the movie “Thor: Love and Thunder.”

The concept art, titled simply “The Shameful Moon,” depicts Goldblum’s character in the same costume and a disembodied Korg, both aboard a Sakaar ship. The presence of the rocky facade of Waititi in the lower left corner of the image confirms that this scene takes place somewhere between when the heroes of the film, Thor, Jane Foster and Valkyrie, get their hands on the lightning strike of Zeus, and before the final battle of the film, perhaps. When they first encounter Gorr, Tessa Thompson’s character is injured. However, given the past words of Waititi and Hemsworth and the almost four hours of material they had, it is impossible to say why such a scene was cut and whether it was filmed at all.

Goldblum was spotted in Australia at some point during the filming of Thor: Love and Thunder, and the same goes for Peter Dinklage, who played Eitri in Avengers: Infinity War. However, their scenes could have become more fun parts that were eventually cut by Waititi. In any case, Ben-Mimun’s work pays tribute to the eccentric character of the Grandmaster, which is not surprising, because the artist also worked on Ragnarok.

“Thor: Love and Thunder” will be streaming in September to commemorate Disney Plus Day, however, it is possible that the scene featuring Goldblum will never see the light of day, given that Waititi stated that the deleted scenes were deleted for some reason. As for the quality, “Thor: Love and Thunder” for the most part did not meet the expectations placed on its predecessor, and “Ragnarok” is still considered the best film.

Is there a chance that MCU fans will see the Grandmaster in the near future? Well, it’s impossible to say, but the Hulk Woman has already teased some Sakaar influence approaching Bruce Banner, and Goldblum is the most famous inhabitant of the planet. However, it’s also possible that Marvel Studios could install the building blocks for a future World War Hulk storyline.

“Thor: Love and Thunder” will be available on Disney Plus from September 8, 2022.

Valve Ensures That The Steam Deck is Compatible With The Entire...