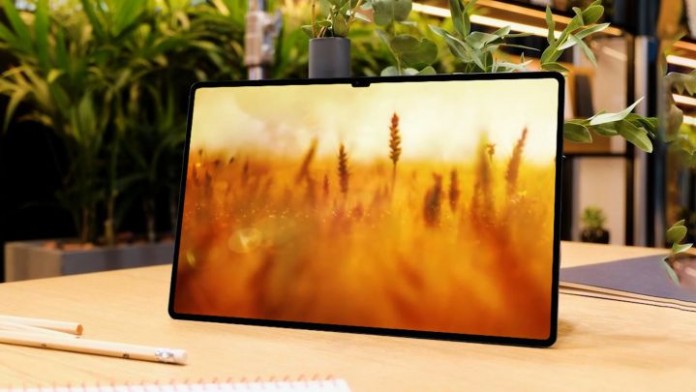 Samsung Galaxy Tab 8 Ultra: Samsung has some of the most powerful devices on the tech market. The Galaxy S and Galaxy Z Fold range are the most top that you can find, but there is another family that also stands out in another segment. We are talking about the world of tablets where the Galaxy Tab are great exponents. And today we have to talk about the latest model, since an image has been leaked in which the Samsung Galaxy Tab 8 Ultra will have a side notch.

One of the things that we have become used to seeing on smartphones are notches. Yes, those holes or extensions of the frame in the upper part have been the tonic of many companies since Apple launched the iPhone X with that extension of the upper frame where some components were housed. Each firm has then made its own interpretation and here there is no discussion that the width varies depending on the design of the company.

But this feature has been alien in the world of tablets, so much so that you may not remember any tablet with notch until today. And it is that everything indicates that the Samsung Galaxy Tab 8 Ultra will come with a notch in the part of the upper frame of the tablet. It is curious to see this type of detail in a device such as tablets, and even more so in a place as rare as one of the longest frames.

The design, as we can see in the Ice Universe tweet, is not far from what has been seen so far within what the firm’s peripherals are beyond the aesthetic detail of a notch that stays right in the middle of what it could. be the top frame. It should be, since otherwise in landscape mode you could not place it in a better way to make video calls.

The features of the Galaxy Tab 8 Ultra

At the moment some details of the Galaxy Tab 8 Ultra have been leaked, which postulate it as one of the great tablets on the market. According to what PhoneArena tells us, we would find a 14.6-inch device on a 120 Hz refresh rate screen. As far as battery is concerned, we find a device with a 12,000 mAh battery with a fast charge of 45w of power.