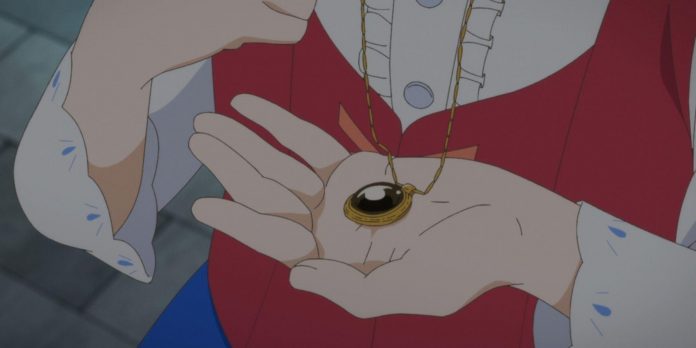 Below are spoilers for the 9th episode of the 3rd season of the series “The Rise of the Bookworm” “Black Protective Charm”, which is currently being broadcast on Crunchyroll.

As “The Rise of the Bookworm” approaches the season finale, the high priest and his nefarious allies finally make a move, revealing their cruel intentions. There are strong allies on the side of the Mine, but will they make it in time so that it does not fall into the clutches of the enemy?

The penultimate episode of the third season of “The Rise of the Bookworm” is filled with events like never before in this usually soothing isekai anime. Mayne is forced to make a fateful decision to protect what she loves most.

Two kidnappers grab Mayne and Tuuli and stuff them into bags. Their father Gunther acts quickly and runs after the kidnappers, quickly rescuing Mayne. Another kidnapper tries to threaten Tuuli, but mana Mine goes out of control, paralyzing the kidnapper long enough for Gunther to save Tuuli. Gunther and Damuel decide that they need to tell Ferdinand about the nobleman who entered the city, and Mayne activates the protective spell that Sylvester gave her. Leaving Tuuli at Benno’s, the Main group quickly heads to the cathedral.

Seeing Damuel’s Rot signal from afar, Fran tries to meet Ferdinand, but also tells another assistant of the chief priest Arno that he is not there. He asks Arno to tell Ferdinand about the nobleman who entered the city, when Delia approaches him and asks about Maina. She explains that Dirk’s new father has arrived and he wanted to meet Mayne. When Mayne arrives at the cathedral with Gunther and Damuel, Fran reports that Ferdinand is not here, believing that he has been summoned by the knights. However, Damuel claims that he also failed to contact him, so the group decides to talk to Arno again. Before leaving, Damuel gives Mayne a magic ring, which the kidnapper used as evidence.

Walking through the halls, Fran notices the high priest Bezevanst walking with Count Bindewald, along with Delia and Dirk, who has finally concluded an adoption agreement with Dirk. He tries to avoid them, but they end up bumping into them. Delia informs Mayne that Bindewald has decided to adopt her along with Dirk, but Bindewald suddenly explains that Dirk’s contract is a slave one. Mayne reveals what the contract entails, and Delia demands an explanation from Bezevanst, who explains that in exchange for adopting Dirk, Mayne will be banished from the cathedral. Bindewald turns out to be the one behind the Spring Prayer attacks and summons his men to take the Mine.

Damuel and Gunther jump in to protect Mayne, and Bezevanst is surprised to see that Mayne has a knight as a bodyguard. Not wanting the knights to find out about his plans, Bindewald tries to kill Damuel, but Mayne jumps up to protect him. The two have a short magical battle in which Mayne uses a ring taken from the kidnappers to use his magic power. Bindewald notices the ring and reveals that it is a bondage ring that prevents its owner from harming his master, although it is not active since the contract has not been sealed. Bezevanst tries to use Dirk’s mana against Mine, but it drains Dirk. Since Bezevanst uses Dirk as a shield, Mayne cannot fight him. Suddenly, she is grabbed by Bezevanst’s servant, who brings Mein to Bindewald. Bindewald cuts off Maina’s finger and forces her to put her bloody seal on the contract.

Before that happens, Gunther knocks down the attendant and Bindewald, saving Mayne. Enraged, Bindewald wounds Gunther with a magical attack, infuriating Mayne and forcing her to attack Bindewald with her mana. When Mayne turns his anger on Bezevanst, he quickly reveals the item he received from Viscount Gerlach, a black gem that drains mana. However, the gem is destroyed by a huge supply of mana Mine, and Bezevanst becomes a victim of a mana attack Mine. While the fight is going on, Ferdinand suddenly appears on the scene.

Bezewanst and Bindewald try to pin the blame on Mayne and demand that Ferdinand arrest Mayne. Mayne asks if she will be charged with a crime, and Ferdinand confirms that she and her family are most likely in trouble. Mayne takes out the charm Sylvester gave her, and Ferdinand takes an interest in him. Mayne explains that it should be a protective spell, and Ferdinand agrees that it is a pretty strong spell, but only if she is ready to become Sylvester’s adopted daughter right now. Although Gunther begs Mayne not to do this, Mayne agrees to have her family and friends protected. With her promise set in stone, Ferdinand turns to take care of Bezevanst and Bindewald, telling Maina to set up a wind barrier to protect her loved ones.

Unpacking, Between Boxes And Pixels. Knowing The Origin Of The Trip

Twitter Increases The Number Of Users To Verify Events That Circulate...