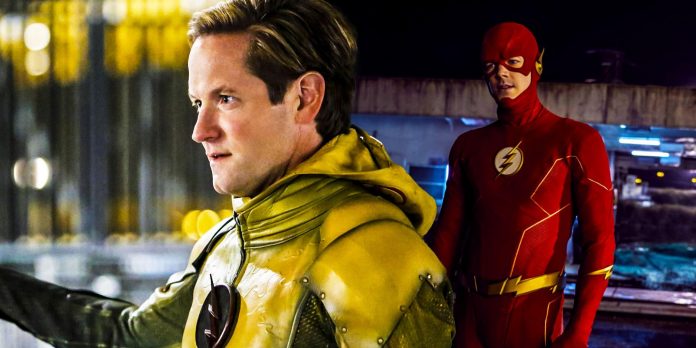 Attention: spoilers for season 8, episode 17 of the Flash

The return of Matt Letcher’s “Reverse Flash” risks repeating Barry Allen’s oldest mistake in “The Flash.” The promo of the 18th episode of the 8th season of “Flash” titled “The Man in the Yellow Tie” confirms that Barry’s new partnership with Mina Dhawan will lead to another confrontation with his worst enemy. But, surprisingly, it will be Letcher and Tom Kavanagh playing the character when they meet again.

Over the past few years, Barry’s battles with Eobard Tone have all involved a version of the character with the face of Harrison Wells. Given his importance to the series and his recent conflict with Barry in the “Armageddon” event, it wasn’t a big surprise when Barry paid him a visit to his prison cell in Lian Yu. Somehow, The Flash is going to follow that up with the guest appearance of the Reverse Flash Matt Letcher, who was recently seen in Legends of Tomorrow. Judging by what is already known, it seems that he is the mysterious “partner” of Mina Dhawan, who helped her create an artificial source of speed.

Needless to say, Thawne’s presence in Central City could cause all sorts of problems for the Flash Team from Arrowverse. Among the possible consequences of the return of Reverse-Flash are massive changes in the timeline. However, their cause may be not only the Tone itself. Barry has a track record of making serious mistakes when it comes to time travel. Barry knew from the very beginning of his superhero journey that changing the timeline could lead to disastrous consequences. He made his first mistake in time travel when he tried to prevent the Weather Wizard tsunami, and perhaps made his biggest mistake at the end of season 2 when he saved his mother and created a Flashpoint. And now history risks repeating itself. Barry’s interaction with Thawne in season 8 of The Flash may inadvertently lead to unforeseen changes in the future of the Reverse Flash and, in turn, Barry.

Barry’s exchange with Matt Letcher’s Reverse Flash in the “Man in the Yellow Tie” promo hints that the latter has not yet become a Reverse Flash. Barry’s comment: “I have to believe you don’t remember who you are,” attributes the situation to memory loss, although it may actually be that Barry is dating Thawne at an earlier point in his timeline, perhaps before he became a Reverse Flash. If it’s Eobard Tone who doesn’t have a personal relationship with The Flash, what Barry does and says during their upcoming meeting may influence some of his future decisions.

If Matt Letcher really plays a young and inexperienced Reverse Flash, who may be on the verge of acquiring his speedster abilities, the fate of Eobard Tone may change forever when his paths cross with his future enemy in the 8th season of “Flash”. To prevent Thawne from taking his evil path, Barry must avoid this scenario. Thanks to his past experience and mistakes, Barry knows very well the risks associated with changing people’s futures.

How Darth Vader’s duel with Obi-Wan reflects his reunion with Ahsoka...