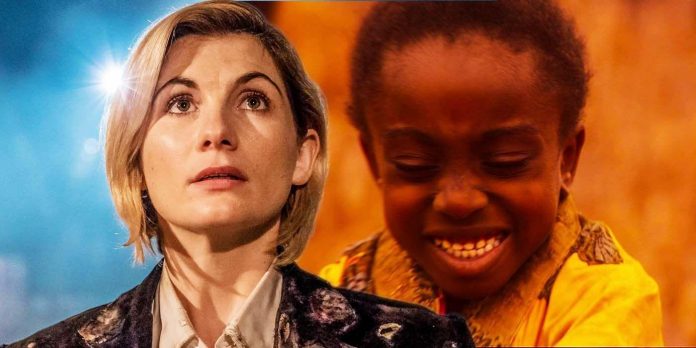 Doctor Who‘s Timeless Child retcon is officially pointless. Chris Chibnall’s tenure as Doctor Who showrunner was remarkably controversial. At the heart of the controversy was his unexpected decision to rewrite the franchise’s lore by revealing the Doctor is not a Time Lord at all; rather, she is in fact the Timeless Child, a being who originated from beyond this universe and who became the base genetic code for the entire Time Lord race. Chibnall originally came up with the idea of the Timeless Child back in the ’80s, when he was just a fan watching the classic series; it’s loosely inspired by hints from the Sylvester McCoy era that the Doctor was “more than just a Time Lord,” seeded into the narrative by script editor Andrew Cartmel.

The Timeless Child has divided the fanbase. Some have been willing to see how things pan out, especially in the upcoming Doctor Who Centenary Special, where Chibnall is expected to draw the threads of his stories together at last before bowing out. Others have rejected the idea outright arguing it essentially turns the Doctor into something she was not – a god who can never be truly killed. Ironically, even Andrew Cartmel isn’t a fan; his so-called “Cartmel Masterplan” was all about restoring a sense of mystery to the Doctor, whereas he feels the Timeless Child is too concrete.

Both Chibnall and Thirteenth Doctor Jodie Whittaker are due to depart after the upcoming Doctor Who Centenary Special. In truth, it feels as though their time is already wrapping up; Doctor Who Magazine #577 contains a final interview with Chibnall discussing his time on the show, and spinoffs are being announced in other mediums featuring secondary characters from the era; that normally doesn’t happen until after the final episode. Given that’s the case, now seems to be the right time to evaluate Chibnall’s Timeless Child retcon.

Chibnall Didn’t Achieve His Goals With The Timeless Child

Speaking to Doctor Who Magazine, Chibnall explained the Timeless Child retcon was a very personal idea for him, because as someone who was adopted as a child he wanted to tell a story of adoption. Looking beyond his personal experiences, though, Chibnall intended the Timeless Child retcon to expand the franchise. “The thing I wanted to dispel was this sense that there was a locked-in, fixed myth,” he observed, “and that the only stuff that counts is what’s been on screen so far. I wanted it to feel like the story could get much bigger than this.” Chibnall hoped to expand the on-screen universe, to stop the show ever having to worry about the regeneration cap and allow writers to tell stories with as many Doctors as they want. To be fair to Chibnall, some have been able to look beyond the story itself and understand his motives; returning showrunner Russell T. Davies supports the Timeless Child retcon, believing it opens up storytelling potential. “But now, the Thirteenth Doctor has shown us Doctors galore, with infinite possibilities,” he wrote in an online introduction to a prequel for his first Doctor Who story. “All Doctors exist. All stories are true.”

Unfortunately, Chibnall’s Timeless Child retcon was executed in rather a clumsy fashion. It’s a huge change to Doctor Who lore, and certainly it means the show need never deal with the problem of the Doctor running out of regenerations again. Fundamentally, though, it doesn’t challenge the actual character of the Doctor at all. Chibnall even signposted this in the episode explaining the retcon, “The Timeless Children,” with Jo Martin’s Fugitive Doctor appearing in a Matrix vision to reassure the Doctor this doesn’t really matter. “Have you ever been limited by who you were before,” she asked, reminding the Doctor of a truth that allowed her to break out of the Matrix. The Timeless Child changes everything – and nothing.

The Timeless Child Focused On The Wrong Questions

The Timeless Child retcon has allowed Chibnall to introduce a past incarnation of the Doctor, played by Jo Martin. She’s been a highlight of the series, debuting in “Fugitive of the Judoon” and leaving viewers fascinated to learn more. Surprisingly, though, in his interview with Doctor Who Magazine Chibnall reveals the Fugitive Doctor was a spontaneous addition; the mystery character was originally supposed to be some sort of alien princess. That perhaps explains why, when Chibnall did reveal the Fugitive Doctor’s past, he resorted to classic tropes that have been used so many times before and hence lacked dramatic impact. She was used to tie the Doctor to a secret Gallifreyan black ops group called the Division who policed the timeline, but she went rogue because she came to disagree with their methods.

Doctor Who: Flux saw the Thirteenth Doctor finally discover her adopted mother Tecteun in the Division’s headquarters, where she delivered a basic infodump before promptly being killed off. This infodump contained the seed of an interesting, and frankly profoundly disturbing, idea. Tecteun compared her relationship with the Doctor to the Doctor’s relationship with her companions, suggesting the Doctor’s inability to commit was the unwitting perpetuation of a cycle of abuse deeply ingrained within her psyche. There’s nothing especially new about questioning the dynamic between Doctors and their companions – this dates back to Sylvester McCoy’s time as the Doctor, where his Seventh Doctor treated his companion Ace as a pawn, and the Peter Capaldi era interrogated the idea as well. But the cycle of abuse was new, suggesting Tecteun and the Division had shaped the Doctor more profoundly than she had ever realized. This had the potential to serve as a launchpad, forcing the Doctor to confront her own flaws, but instead, the show pivoted to a Doctor-companion romance that didn’t quite work. Rather than resolve to heal, rather than step forward in hope that she could change, in “Legend of the Sea Devils” the Doctor rejected Yaz because she lacked hope. “I can’t fix myself,” she reflected, “to anything, anywhere, or anyone. I’ve never been able to. That’s what my life is.” Whittaker’s delivery added a powerful pause after the first four words, imbuing them with a tragic depth of meaning. It’s sad to see a Doctor’s era come to an end in such brokenness and defeat.

Frustratingly, Chibnall seems to have had no interest in exploring the more interesting questions that stem from the Timeless Child retcon. Doctor Who: Flux established the Timeless Child’s multiversal origin, revealing the Doctor originates from somewhere beyond this dimension. The multiverse is all the rage in popular culture right now, with franchises such as the MCU and even Buffy the Vampire Slayer using it in remarkably creative ways. A multiverse opens up a fresh opportunity for exploration; there can be dimensions similar to our own, where everything is just a little different, or there can be others where the laws of physics operate in completely different ways. Chibnall’s decision to incorporate the multiverse into the story of the Timeless Child is inspired, but sadly flawed – because having tossed the idea in there, he hasn’t bothered to explore it. Indeed, it seems he had no intention to. When Doctor Who Magazine asked him about the Doctor’s true origin, he gave a simple answer. “I don’t know. Nobody knows. That’s the point. Everything we’ve done goes back to that central idea.” Chibnall simply wanted to get back to asking the questions about the Doctor’s identity again, without making any attempt to answer them.

The Timeless Child Will Be “Ignored”

Chibnall expects the Timeless Child to be ignored by his successor, returning showrunner Russell T. Davies. In part this is presumably because he thinks he’s said all that needs to be said about the Timeless Child, and doesn’t believe any other showrunner would be interested in exploring those unanswered questions either. But it’s also likely because he is aware the Timeless Child retcon hasn’t been well-received. The history of Doctor Who is one of countless pivots, retcons, and changes in direction; Chibnall will be well aware the Doctor Who TV movie established the Doctor was half-human back in 1996, for example, an idea that was then ignored until the controversy had been forgotten and then dismissed in a throwaway line of dialogue. It wouldn’t be a surprise if something similar happened to the Timeless Child.

In the meantime, Chibnall has attempted to pivot, and the last few episodes aren’t about the Timeless Child. Rather, they’ve committed to a flawed Doctor-companion romance. The arc is notable because it’s the first time the Doctor has been part of an LGBTQ+ romance, but unfortunately it still feels forced. This is partly because it was poorly signposted, but also because it’s clearly set to end in tragedy – given both actors involved are leaving in the Doctor Who Centenary Special – highlighting a problematic trope that historically befalls queer relationships. All this unfortunately means Chibnall is unlikely to have much of a legacy on the small screen. It’s disappointing to see it end like this.

Jessica Simpson starred without makeup in Sunkissed Selfie: “Woke up with...