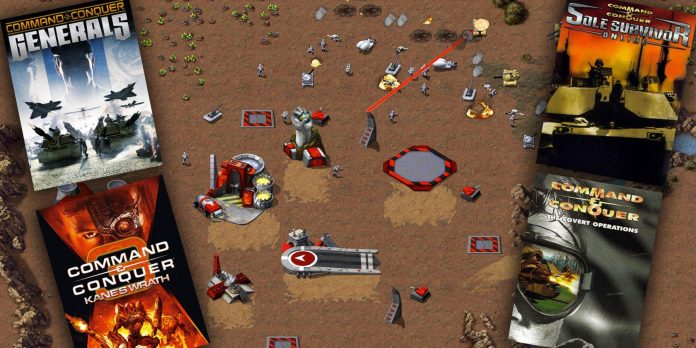 Once upon a time, Command & Conquer was the most popular real-time strategy game. The series was led by Westwood Studios, and it took players into an exciting alternate history of two factions fighting for control of the world. During its heyday, the series released new issues almost every year, and this led to the emergence of some of the best games in the genre of real-time strategy. However, after Command & Conquer 4: Tibetan Twilight failed to meet expectations, the series disappeared into relative obscurity. After that, there will be several games that have received mixed reviews, and the series will be dethroned as the king of the RTS genre.

The main Command & Conquer series has been on a short hiatus since the release of Tiberian Twilight in 2010. There was a mobile game and a browser game, but it was nothing compared to the earlier days of the franchise. The series remained dormant until 2020, when the first two games returned with the Command & Conquer Remastered Collection. Fans were thrilled to see the remastering of the original games, but they could only guess what would happen next with the franchise. If EA wants to bring the series back into the spotlight, it needs to continue working on remasters.

In Command & Conquer Remastered Collection, the first two games of the series have been updated in HD format. The plot and gameplay remained intact, but they were painted in 4K. The game featured various improvements, such as an improved user interface, improved cinematography, and a fairly robust multiplayer mode. He also added all expansion packs and exclusive console missions. This collection had almost everything fans of the franchise could ask for, and now they want more.

The revamped collection seemed like a return to form for the franchise, and it may have been one of the first good things EA has done for the series in recent times. Instead of trying to create a new game, as it was with Command & Conquer Rivals and Tiberium Alliances, the series decided to return to the past, in the early days. It was a time when Command & Conquer was at the peak of popularity, and therefore the collection seems to be a love letter to the cult series. It also provides a valuable glimpse into the early days of the RTS genre.

Command & Conquer and Command & Conquer Red Alert are great games, but this is just the beginning of the franchise. There are so many other games in this series that deserve to be remastered. There were not only three different Red Alert titles, but also a very popular series dedicated to the Battle of Tiberium. On top of that, there have been countless expansion packs and a couple of individual Command & Conquer games that also need to be updated in HD.

Command & Conquer Red Alert has already been updated in the Remastered Collection, but other games in this sub-series have not yet been updated. The story of Red Alert follows the Soviets and Allies in an alternate history where the Soviets tried to take over Europe. This story has been told in three different games, and some consider the second part to be one of the best RTS games ever made. Modern gamers should experience this groundbreaking and iconic trilogy.

The first Command & Conquer game was continued in 1999 under the title Command & Conquer: Tibetan Sun, and the storyline continued in two more games after that. This series followed the war between GDI and the Nod Brotherhood as they fought for control of the crumbling Earth. Unfortunately, the fourth part did not reach the famous third, but the series still deserves an update. Once the Command & Conquer franchise was the biggest name in the RTS genre, but has since gone into the shadows. The updated collection seemed like a return to form for the series, and the train of updates should not stop there. This series deserves to shine again.

The Grey Man: What happened to Brother Six?