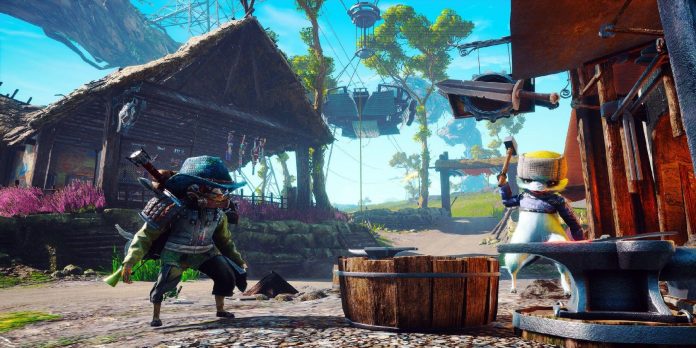 Developed by Swedish studio Experiment 101, the Biomutant game was somewhat ambiguously received when it was launched in 2021. Although the game initially seemed incredibly interesting, allowing the player to create his own strange mutant creature in a world devoid of humanity, Biomutant proved to be a disappointment for some due to the fact that he did not live up to his great ambitions. However, some still like the unique world and narrative of Biomutant, and he managed to earn a decent amount of money for both Experiment 101 and his publisher THQ Nordic.

In fact, Biomutant was doing so well financially that it recouped its costs within the first week after launch. Biomutant’s financial success was enough to inspire Experiment 101 to release several more versions of the game on new platforms. The versions of Biomutant for PlayStation 5 and Xbox Series X/S have already been introduced online, and now it seems that the game may also be released on the Nintendo Switch, as Nintendo Life has discovered a game retailer with the name listed for the hybrid console along with a release date of October 25, 2022.

Although the appearance of the Biomutant port for Switch, along with a potential release date, does not exactly confirm that the game is coming to a hybrid console, there is also a replacement box art for Biomutant on the new platform, implying that this is possible. This isn’t the first time Biomutant has been associated with the Nintendo Switch. Back in 2019, it was mentioned that Darksiders 2 will also be released on Switch.

Nevertheless, this is the closest Biomutant release on Switch to fans. The October launch date will be celebrated more than a month after Biomutant becomes available on next-generation consoles, and these versions of the game will be launched on September 6. It is possible that with this leak from Gaming Replay, an official announcement from Experiment 101 or THQ Nordic could follow. If the scheme created by the disclosure of the next-generation versions of Biomutant is followed, an appropriate announcement may be made shortly after the leak.

If Biomutant were released on the Nintendo Switch, it wouldn’t be the only THQ Nordic game to appear on the console in the next few months. According to another leak through a video game retailer, the AEW Fight Forever promotion may be coming to Nintendo’s hybrid console after months of confusion over which platforms the upcoming wrestling game will be available on.

Biomutant is already available for PC, PS4 and Xbox One. The PS5 and Xbox Series X/S versions of the game will be released on September 6, 2022.

Dying Light Receives The Next Generation Patch On PS5: All The...