Home Entertainment The release date of the Galaxy Z Fold 4 and Z Flip... 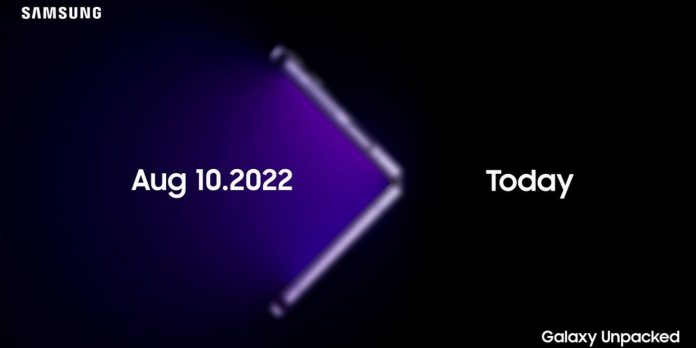 The informant apparently revealed the launch date of the Samsung Galaxy Z Flip 4 and Galaxy Z Fold 4. Over the past few weeks, several leaks about Samsung’s next-generation foldable smartphones have revealed quite a lot about them. A render of what’s called the Galaxy Z Flip 4 was also posted online last week, showing the side profile of the device and showing off its volume rocker and power button. Last month, the device was also fully featured on the TechTalkTV YouTube channel, where a dual rear camera and other design elements were shown. The video has since been removed from YouTube for alleged copyright infringement.

A lot of rumors have also revealed a few details about the Galaxy Z Fold 4, which will be an update of the Galaxy Z Fold 3 released last year. According to reports, it will not come with a built-in S Pen stylus due to Samsung insisting that form is above functionality. The news came from an Ice Universe informant who stated that Samsung is skipping this feature because it wants to make the new device smaller than its predecessor. Another recent rumor also suggested that it could come with a nearly square main display instead of the 5:4 aspect ratio like the Fold 3.

Tipster Evan Blass tweeted an image that is said to be an invitation to launch Samsung’s next-generation foldable smartphones. The image, which includes a silhouette of what appears to be a Galaxy Z Flip 4, confirms that Samsung will hold an event dedicated to the presentation of the device on August 10. In particular, nothing is said about Z Fold 4, but Blass said in a subsequent tweet that the event will be called “Open Your World”, suggesting that Z Fold 4 may also appear on this day.

Galaxy Z Flip 4 will be released in just 3 weeks

Blass also notes that the image has been edited to remove some details, but there is no indication of what those details might be. As a rule, invitations to events include the address of the venue and are only available to media representatives to avoid potential security problems. So it is quite possible that the image only edited this information and nothing that could have any real meaning to the general public.

In terms of what to expect from the Galaxy Z Flip 4, it will reportedly have the same design as its predecessor, with some minor changes. It is said to come with a Qualcomm Snapdragon 8 Plus Gen 1 chip, a 6.7-inch FHD+120 Hz sAMOLED main screen, a 2.1-inch sAMOLED display, up to 8 GB of RAM and 256 GB of memory. In addition, the Samsung Galaxy Z Flip 4 can also have a 3300-3700 mAh battery with 25W fast charging and 10W wireless charging.

Cobra Kai: Julie Pierce may return in season 4 of the...

Will EA Lose The FIFA License? They Acknowledge Doubts Over A...