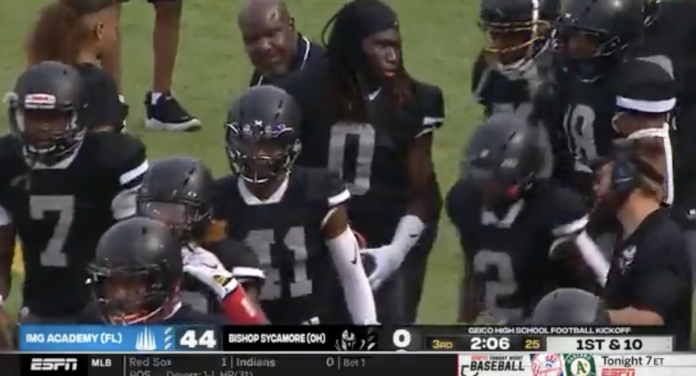 There have been many strange stories with layers of intrigue in the history of sports, but few have captured the whole country as much as the one that began a year ago today.

August 29, 2022 marks one year since the infamous IMG Academy vs. Bishop Sycamore game. It was a school game that was broadcast on national television and was believed to take place between two relatively equal schools.

Instead, the game was a breakout one in which IMG Academy led Bishop Sycamore by a score of 37-0 at the half before winning 58-0. The game was so lopsided that ESPN broadcasters began to question the legitimacy of Bishop Sycamore as a prestigious school program.

These questions quickly resulted in a scandal that stunned the entire sports environment. Within a few days, an investigation was conducted into the legitimacy of the school, and it soon became clear that the whole thing was basically a giant scam.

In the weeks and months that followed, Bishop Sycamore became a national meme. And fans are celebrating the incredible story on Twitter, having fun with memories of it in every possible way:

In the weeks and months since that fateful game, all sorts of strange details have surfaced.

Apparently, Bishop Sycamore sometimes played full football games twice in three days. They could boast of having four- and five-star high school graduates in their ranks, while in fact they had about half a dozen players in their 20s with children.

It turned out that the founder of the organization, athletic director and head football coach Leroy “Roy” Johnson has a valid warrant for “fraudulent misrepresentation, conversion and unjustified enrichment.”

There are much more details about this scandal than can fit into a one-day reading. But memes are likely to stay forever.