Home Entertainment ‘Never Have I Ever’ Cast Reacts to That Season 3 Cliffhanger, Teases... 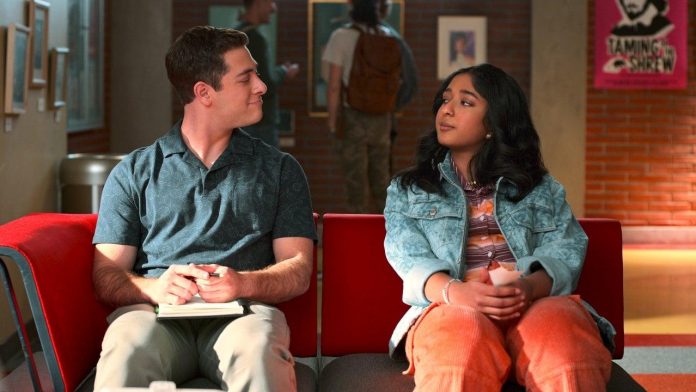 Spoiler alert! Do not proceed if you have not watched all of season 3 of Netflix’s Never Have I Ever.

After a series of romantic roller coasters, Devi seems to have ticked one major item on her checklist in Never Have I Ever’s season 3 finale: losing her virginity — at least, that’s what we’re led to believe. The high schooler kicked off the season in an official (public) relationship with her “dream” guy, Paxton Hall-Yoshida, her social status at an all-time high. While things were hot and heavy for a while with the unlikely couple, issues Devi pushed off to the side soon resurfaced. As Devi quickly learned, being one-half of the school’s most popular couple didn’t exactly solve all her problems.

When her insecurities over them dating magnified the cracks in their relationship, Devi and Paxton end up breaking up early on in the season. But Devi didn’t stay single for too long, embarking on a short-lived secret-turned-not-so-secret romance with Des, the hot son of her mother’s new friend. It went up in flames, however, after ulterior motives — on the part of his mother — were revealed to Devi. So, newly single and slightly defeated, Devi jokingly received a “one free boink” pass from Ben to be used if and when she’d exhausted all her romantic prospects. That time came in the finale when Devi — the last of the friend circle to lose her virginity — knocked on Ben’s door and presumably put that pass to use.

“Whether or not they have sex in that moment, there is a fallout from it. It does shake things up for season 4,” executive producer/showrunner Lang Fisher told ET of what that moment means. “Once the specter of sex appears, the stakes just go higher. So without spoiling anything, I will just say, it does sort of change up their relationship and the dynamics a bit for everybody.”

‘Never Have I Ever’: Darren Barnet and Jaren Lewison Reveal Who They Want Devi to Date (Exclusive)

This video is unavailable because we were unable to load a message from our sponsors.

If you are using ad-blocking software, please disable it and reload the page.

‘Never Have I Ever’: Darren Barnet and Jaren Lewison Reveal Who They Want Devi to Date (Exclusive)

Series star Maitreyi Ramakrishnan admitted she was shocked by the final scene of the season. “My reaction when I read it for sure was, OK, expect in five minutes a call from Jaren and there will be screaming, yelling, freaking out,” the 20-year-old actress recalled. “So brace yourself. Every time I read one of the scripts Jaren [Lewison, who plays Ben] has to call me and I was like, ‘Oh, this one’s gonna be an intense reaction so brace yourself.’ But I was like, ‘Woah, OK.'”

“I was honestly jazzed,” Ramakrishnan continued, “mainly more about the fact that it’s Devi on her own terms, making a choice. Living her own dream in her own time and, to me, that’s pretty epic.”

Lewison echoed her sentiments, acknowledging that while Devi and Ben were not romantic during season 3, Ben was always lingering in the background.

“I think it’s interesting that ending, because we’re not quite sure what ends up happening,” he reminded, considering viewers don’t know what truly happened behind the closed door. “I think it’s going to be really exciting for fan reactions for that end moment because really you have no idea. There’s going to be definitely two sides that are like, ‘Yes!’ and then another side that’s like, ‘We don’t know, maybe it’s a no.’ Season 4, where do you go from there depending on if it does or doesn’t happen? How does that change their relationship? There’s a lot to dive into, especially thinking about that fourth season… Can’t give too much away, but it’s wild.”

And while it appears that the love triangle between Devi, Ben and Paxton is over with Paxton getting into college and mending things with Devi post-breakup, Fisher promised viewers that both boys are very much still in the picture in the upcoming final season.

“The answer is no,” Fisher replied when asked if this was the end of the road for the Team Ben versus Team Paxton debate. (Season 4 will introduce a new love interest, a bad boy/skater type played by Love, Victor’s Michael Cimino.) “The love triangle continues on and lives on into season 4. Paxton does go to college, but he’s still as big a part of season 4 as he was any other season. But it’s still there.”

“And we do make a choice at the very end,” she assured. “At the end, she chooses someone and that choice is made. We don’t string it on for eternity, but [the love triangle] does continue on into season 4.”

Ask Darren Barnet and Lewison what their personal hopes are for Devi and you’re going to get diplomatic answers — mostly.

“This always seems like a trap of a question,” Barnet confessed. “I’m just going to say I’m Team Devi. I hope she finds her happiness in herself and finds whoever she wants.”

Lewison, meanwhile, had a very Ben-like answer: “I like to break mine up into percentage points, so I give 70 percent Team Ben because I’m biased, but 20 percent Team Darren and 10 percent Team Devi because we all hope that she finds self-love.”

Season 3 of Never Have I Ever is streaming now on Netflix.