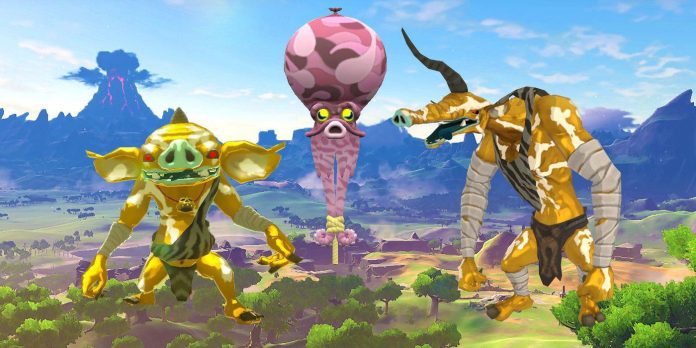 There are many different enemies in The Legend of Zelda: Breath of the Wild, and some of them are much rarer than others. Breath of the Wild, which was released in 2017, requires only about 50 hours to complete it, but has endless exploration as well as two DLCs. Thanks to this research, players are still discovering hidden secrets five years after the game’s release.

There are over a dozen types of enemies in Breath of the Wild, many of which have multiple subtypes. Some enemies can only be found in certain conditions, while others are only available in the main mode. The enemies Link has to face come in different shapes, sizes, colors, and difficulty levels, and some of the BOTW enemies are quite strong.

There are quite a lot of enemies in Breath of the Wild, which are very rare and difficult to find. The following list will include some overworld bosses, but will not include dungeon bosses as they are only available once. Various traps will also not be included, only real physical enemies.

Stalnox is hard to find and easy to miss in BOTW

Despite the fact that there are quite a lot of Hinox scattered across the landscape of The Legend of Zelda: Breath of the Wild, finding Stalnox is a bit more difficult. Stalnox is a skeletal version of Hinox that only appears in the dark. Players can even stumble upon Stalnox during the day without even suspecting that it is there. One of the few Stalnox in the game is in the castle of Hirul, guarding, unfortunately, the fragile Shield of Hylian BOTW.

In general, Talus is a rarer enemy in Breath of the Wild; however, some of them can only be found in certain places. Talus is hard to spot while Link is practically not standing on them. In fact, there are eight different types of Taluses in the game.

However, the Igneo Talus and the Ice Talus can only be found near Mount Death, the Gerudo Highlands and Mount Hebra, respectively. They tend to blend in very well with the environment and can be a strong opponent if Link doesn’t have a suitable weapon. This is of particular concern as BOTW weapons have limited durability, which we hope will be fixed in the sequel.

Wizzrobes are common in BOTW, unless they belong to a specific type

Vizzrobov in The Legend of Zelda: Breath of the Wild can be found quite easily, there are three types of Vizzrobov, which are much rarer than others. Fire wizard, ice wizard and electric wizard are quite common and can be found near ruins and towers all over Hyrule. Meteo Wizzrobe, Blizzrobe, and Thunder Wizzrobe have several ways to attack Link, using their staffs to summon Kiz or Chuchu at the same weather changes that will affect Link.

Molduga can only be found in the Gerudo desert BOTW

Modulga are the bosses of the aboveground world in Legend of Zelda: Breath of the Wild, which can only be found in the Gerudo Desert. Link has the opportunity to fight Molduga while surfing with a sand seal shield; however, horses cannot be in the desert unless the BOTW player breaks the horse there. Giant sand monsters are very sensitive to sounds, and they are really difficult to fight. There are only four places in the Gerudo Desert where Molduga can be found: the Dunes of Torum, the Southern Oasis, the Exile of the Northern Dragon and the Land of the Arbiter.

Certain types of guardians are very rare in BOTW

Rare enemies are found only in DLC BOTW

There are several other enemies whose rarity is due to the fact that they are only available in the DLC for The Legend of Zelda: Breath of the Wild. Along with the golden enemies, the Heavenly Octoroc can also be found only in the Master Mode from the DLC The Master Trials. The Celestial Octoroon can appear anywhere in Hyrule, cannot actively harm Link, and can be easily killed with a single arrow. They can usually be found in groups of three or four, carrying an enemy board or treasure chests, and are alerted to Link’s presence by Link’s whistle or the sound of a Goblin horn.

The Ballad of the Champion for BOTW has added a master cycle and new enemies that can only be found in this DLC. These include the Igneo Talus titanium found in Darman Lake and the Molduking found in the Gerudo Desert. Both are incredibly difficult bosses in the world, which Link must pass one by one for different tests.