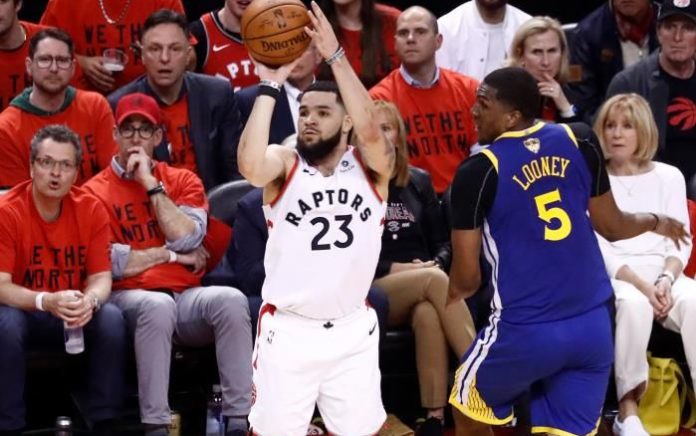 The Toronto Raptors first came to the Staples Center as NBA champions and claimed their title with a surprise victory, but deserved, against Los Angeles Lakers of the super stars, who saw their triumphal streak cut.

While the Milwaukee Bucks, Denver Nuggets and Philadelphia Sixers also won as did the Portland Trail Blazers, but in very close matches, which in two had to be defined in overtime.

Quite the opposite of what happened with the Phoenix Suns who played their best individual and team basketball to overwhelm the Brooklyn Nets.

The Raptors faced the new Lakers and showed their status as champions by winning the 104-113 victory, after dominating all facets of the game, despite another dazzling performance by LeBron James, who achieved a new triple double, 85 his career.

His young values, led by Cameroonian power forward Pascal Siakam and base Fred VanVleet, were the leaders that allowed the Raptors to cut the triumphant streak of power forward Lakers of center forward Anthony Davis and star forward LeBron James.

Siakam achieved a double-double of 24 points and 11 rebounds as leader of the Raptors (7-2), who won the third consecutive game, the sixth of seven, and occupy the second place in the Atlantic Division, only surpassed by the Celtics from Boston (7-1) that have the best brand in the league.

VanVleet confirmed his status as an important player in the champions and also finished with a double-double of 23 points and 10 assists. The Spanish Marc Gasol, meanwhile, contributed two points and seven rebounds.

The triumph of the current NBA champions had double value when playing without two key men after losing the starter, base Kyle Lowry for a fracture in the left thumb, and the Spanish power forward of Congolese origin Serge Ibaka for a twist in the right ankle.

Davis scored 27 points and ended up as the leader of the Lakers attack, but they were not enough to avoid defeat, the first to suffer in his field at the Staples Center in the five games they have played.

James also could not be a winning factor although he contributed a triple-double of 13 points, 15 assists and 13 rebounds.

However, the Lakers suffered their first defeat since the first meeting of the season, when they fell to the Clippers, when they saw that after their two big stars there were no other players who could help them in the teamwork.

Greek power forward Giannis Antetokounmpo contributed a double-double of 35 points and 16 rebounds that allowed the Bucks to beat the Oklahoma City Thunder 119-121 at home.

Antetokounmpo scored 24 points in the second half, while baseman Eric Bledsoe contributed 25 points and nine assists as leaders of the Bucks (7-3), who have won five of the last six games they have played.

The Serbian center Nikola Jokic was once again the decisive player of the Denver Nuggets when he got the basket with which they won at home by 98-100 in time of extension to the Minnesota Timberwolves.

Jokic made the winning basket in the absence of 2.4 seconds from the end of overtime, and finished with 20 points, six rebounds and seven assists.

Jokic’s contribution allowed the Nuggets to get their fourth win in a row.

The prominence in the interior game of Cameroonian centerman Joel Embiid and Dominican power forward Al Hoford was the key that allowed the Philadelphia Sixers to beat the Charlotte Hornets 114-106.

Embiid led the Sixers offensive game by providing a double-double of 18 points and nine rebounds that left the Philadelphia team 6-3 and 3-0 in home games.

Horford supported him with another 15 points, seven rebounds and five assists in the 27 minutes he was on the track.

Base Damian Lillard once again became the leader of the Portland Trail Blazers attack who imposed on the extension to 124-113 at the Atlanta Hawks and broke a streak of four consecutive losses, the worst so far season.

Lillard contributed 30 points, seven rebounds and six assists, and led the attack of the Trail Blazers, although he lost the individual duel with the young base of the Hawks Trae Young, who finished with a double-double of 35 goals and distributed 10 passes of annotation.