Home Entertainment The Pokémon Scarlet and Violet variants can be based on time, not... 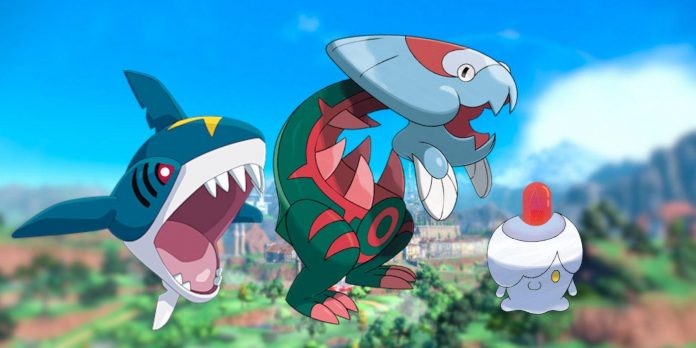 Fans of Pokemon games are already familiar with regional variants of Pokemon. They have existed since the seventh generation and include Alolan variants, Galarian variants and Hisui variants. Currently, the options depend solely on the region from which the Pokemon comes. Some regional variations are expected in the newest game, given the new Spanish region for Pokémon Scarlet and Violet.

With the introduction of legendary Pokemon related to the past and future, Game Freak has been able to provide its fans with time-based options as well as regional options. Fans will have the opportunity to see the evolution of Pokemon in the real world and how their forms have changed and will change in the future. An opportunity to see how some modern Pokemon looked in the past and what changes may happen to them in the future.

In the current Pokemon line-up, there are some that are already based on ancient creatures. Pokemon like Aerodactyl, Tyrunt and Mamoswine are based on pterodactyls, tyrannosaurs and mammoths respectively. Although these Pokemon already exist, Pokemon Scarlet and Violet can give fans versions of modern Pokemon that existed in the ancient past.

Some modern Pokemon may have ancient variants based on real animals in Scarlet and Purple. The Sharpedo may have an ancient variant based on the megalodon, where its size is increased to the size of a Weylord. Doduo and Dodrio could become shorter, stockier and change the shape of their beak to look more like a Dodo bird. The Pokemon Scarlet and Violet also have the opportunity to present ancient versions of more futuristic-looking Pokemon, as in Legends: Arceus with a Voltorb and an Electrode. Many Steel- and Electric-type Pokemon could easily have a more ancient variant, such as a steampunk-style Magnemite or an Egislash based on primitive weapons.

Pokemon Scarlet and Violet also have the opportunity to fix an improperly assembled fossil Pokemon from a sword and shield. Instead of giving players mixed versions like Arctozolt and Dracovish, players could finally see what a real Pokemon looked like. It will also be an opportunity to highlight Pokemon from some of the oldest fossils in games.

Pokémon Scarlet and Violet May have Futuristic regional Pokemon variants

Many Pokemon in the current National Pokedex have a somewhat futuristic theme or appearance. With Pokémon Scarlet and Violet, fans may have the opportunity to see variants of some of their favorite Pokémon with a more futuristic look. This may even lead to some Pokemon having new types. One way to give some of the current Pokemon a futuristic look is to change their type. Litvik and its evolution can change from a fire type to an electric one, and its flame will be replaced by LEDs or light bulbs. Stone-type Pokemon may have steel variants instead, such as how Onyx turns into Stylix.

Do you want more articles about Pokémon Scarlet & Violet? Check out our main content below…

Everything we know about the new starter Pokemon Pokémon Scarlet and Violet, Pokemon deserving of the regional variants Scarlet and Violet in the 9th generation, All new Pokemon shown in the second trailer Scarlet & Violet