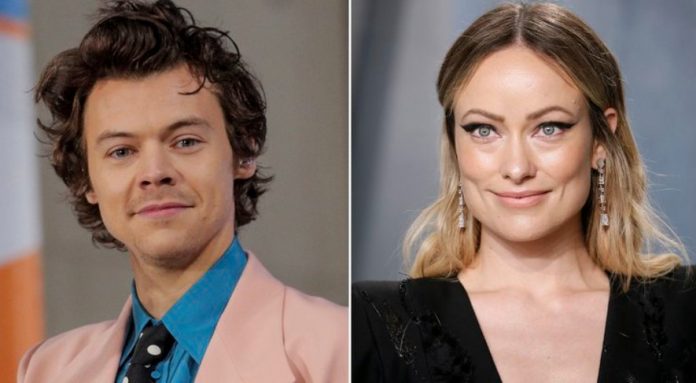 The actress, 36, and the singer, 26, were seen holding hands at their manager’s wedding in Montecito, California this weekend.

Olivia Wilde and Harry Styles were spotted together at a mutual friend’s wedding over the weekend. The brand new couple worked together on the movie “Don’t Worry Darling,” starring the singer and directed by Wilde.

Wilde, 36, and Styles, 26, confirmed their romance by appearing in public holding hands at their agent’s wedding, which took place this weekend at Rancho San Ysidro in Montecito, California.

“They were loving with each other, they held hands and they looked very happy. They are coming from a few weeks , “said a source with knowledge of the topic to the journal P eople.

In the photos, obtained by Page Six , Wilde is seen in a long floral wedding dress as he holds hands with Styles, who is wearing an all-black suit paired with a white button-up shirt. Both actors also wear face masks.

In more snapshots, Styles, who just released the music video for his song “Treat People With Kindness,” wears a white coat while chatting with bride, Glenne Christiaansen, and groom, Jeff Azoff.

Wilde and Styles were later spotted in Los Angeles.

The explosive romance goes public weeks after Wilde and his longtime partner, actor Jason Sudeikis, announced that they had split in early 2020. The two are the parents of two sons: Otis, 6, and daughter. Daisy, 4. The couple began dating in November 2011 and Sudeikis proposed in 2012.

Wilde and Styles spent time together in recent months while filming the thriller “Don’t Worry Darling” in Los Angeles.

The production, set in the 1950s, stars Florence Pugh, who plays a housewife who discovers an unsettling truth in the isolated California community in which she lives. Styles plays her character’s husband.

Wilde told Vogue magazine that he decided to cast Styles after seeing him in “Dunkirk” and “did a little victory dance” when he officially joined the film , which also stars Chris Pine and Gemma Chan.

“Don’t Worry Darling” features Oscar-nominated designer Arianne Phillips (“A Single Man”) for costume design. “She and I did a little victory dance when we found out we officially had Harry in the movie, because we knew he appreciates fashion and style,” Wilde said of her and Phillips’ reaction.

“For me, it’s very modern,” said Wilde de Styles, “and I hope that this trustworthy mark as a man that Harry has – truly devoid of any trace of toxic masculinity – is indicative of his generation and therefore the future. of the world. I think he’s defending that in many ways, spearheading that . It is quite powerful and extraordinary to see someone in his position redefining what it can mean to be a confident man. ”

It is the first relationship Wilde has gone public since she and Sudeikis ended their engagement. Although they are no longer engaged, the former couple seems to have the best breakup in Hollywood, they are often photographed hugging and smiling during walks with their children.

The disease that Camila Cabello suffers worries her fans

Paul Pogba: his son’s first name refers to US rap!