Home Entertainment The original ending of Eternals would have avoided two problems of the... 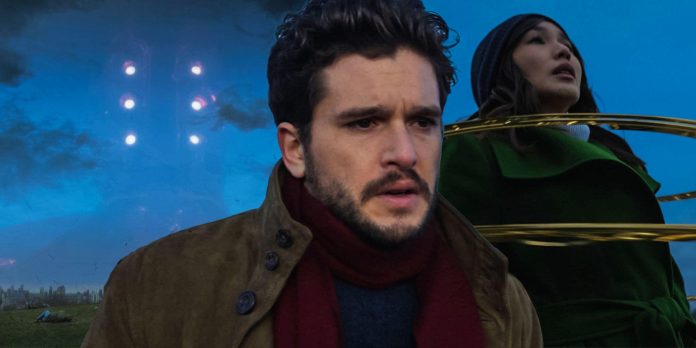 Eternals introduced a new superhero team in the Marvel Cinematic Universe and had a very different tone from the rest of the MCU, which made it one of the most divisive movies from this connected universe – but its original ending, although bleak, would have avoided some of the biggest problems Eternals and Phase 4 are currently facing. With the Infinity Saga now over and the original Avengers team no longer around, the MCU is moving forward with new characters, events, and concepts, though it’s also struggling with many, many problems.

Among the newest additions to the MCU are the Eternals, a group of synthetic beings created by the Celestial Arishem the Judge. Eternals explained that these characters were sent to Earth centuries ago to protect it from the Deviants, their evil counterparts, but once the Deviants were defeated, the Eternals stayed on Earth waiting for a sign to return “home” and helped humanity evolve, though they weren’t allowed to interfere in their conflicts. The Eternals parted ways and re-teamed many decades later after the death of their leader, Ajak (Salma Hayek), the return of the Deviants, and the fast approach of an apocalyptic event called “The Emergence”, which was all about the birth of a new Celestial, Tiamut, from the center of Earth. Now led by Sersi (Gemma Chan), the Eternals joined forces to stop Tiamut’s birth, and by the end of Eternals, the team was divided into two groups.

Sersi, Phastos (Brian Tyree Henry), and Kingo (Kumail Nanjiani) stayed on Earth but were taken by Arishem at the end of Eternals in order to judge their actions and see if humans were worth saving, while Thena (Angelina Jolie), Makkari (Lauren Ridloff), and Druig (Barry Keoghan) left Earth on the Domo and came across Eros/Starfox (Harry Styles), a fellow Eternal offering his help. The future of Eternals is currently unknown as a sequel hasn’t been announced, but had it kept its original, darker, ending, it would have solved the problem of its uncertain future and other problems Phase 4 is facing.

Eternals’ Original Ending Would Have Made The Movie Better

In an interview with Empire in December 2021, Eternals director Chloé Zhao revealed the original ending she had planned for the movie, which was a lot darker than the one it eventually got. In it, the team would have gone back to the Domo, had their memories erased again, and would have been on their way to another planet. Eternals ended on a cliffhanger by leaving the fates of Sersi, Phastos, and Kingo unknown and introducing Eros, whose appearance made way for a bunch of questions about his link to Thanos, how he knows so much about the Celestials, the origin of Eternals, and a lot more. Introducing the Eternals so late into the MCU was a challenge, and their inclusion left more questions than the ones it answered, and the original ending, while dark, would have given proper closure to the story of the Eternals and would have fitted with how Arishem was portrayed: a manipulative Celestial who wouldn’t have waited to punish the entire team, not just half of it.

Eternals’ Original Ending Would Be Better For Phase 4 & Their Future

As mentioned above, the original ending of Eternals would have given its story proper closure but without jeopardizing the team’s future in the MCU. By having the Eternals back on the Domo with their memories erased one more time, Eternals would have had a satisfying ending with few to no loose ends while also leaving the door slightly open for their return in a sequel or other MCU movies or TV shows. Among the problems the MCU’s Phase 4 is facing is the displacement of some events and characters, as is the case of the Eternals. Their arrival at the MCU was already risky given that they were revealed to have been on Earth for centuries, yet this was the first time they were given the spotlight and thus had to answer a bunch of questions, the biggest one being why didn’t they interfere in Thanos’ snap. The Eternals feel out of place, and with the cliffhanger ending they were given, finding a place for them in Phase 4 is getting more and more difficult, more so as the MCU keeps adding more characters and developing the already messy and confusing multiverse. The original ending would have given Marvel the freedom of leaving the Eternals alone while they figure out the rest of Phase 4 but without fully ruling out a return – and as they would have had their memories erased and would have been on their way to a new mission, a sequel could have been a fresh start for them.

Why Eternals’ Original Ending Was Changed

During the above-mentioned interview, Chloé Zhao mentioned that none of her movies have ever had the ending she originally planned for them, and Eternals was no exception. Zhao added that, when it went to black, “everyone was like ‘I don’t know what to do’” and that as this is the MCU, “you want to be excited for what’s next”. Eternals broke the MCU mold with or without the original ending, but keeping it would have benefitted the movie a lot more and would have been a lot better for the team’s now unclear future.

One Forgotten Stephen King Villain Could Be Worse Than Pennywise