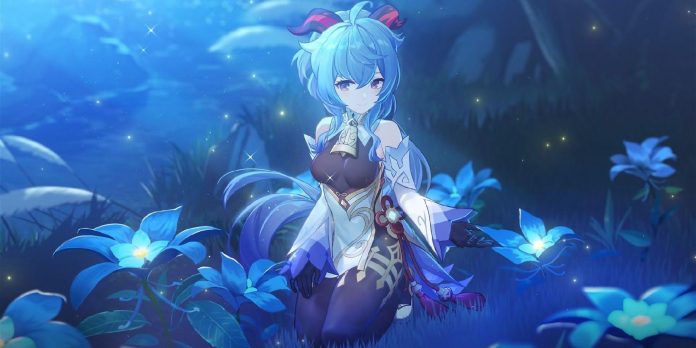 The new Ganyu art from Genshin Impact was presented on Chinese social and streaming platforms Weibo and Bilibili, and the new art is presented on new Visa credit cards from China Merchants Bank. Although the promotion is limited to China, the official image has become available worldwide thanks to the diligent Reddit community Genshin Impact. In addition, a new Genshin Impact advertisement with a Ganyu credit card was released on the aforementioned Chinese platforms.

On the official art, Ganyu is depicted in a modern work suit with glasses and a handbag to promote business with China Merchants Bank. The work suit is blue-white-black to refer to the appearance of Ganya in Genshin Impact. In the background, you can see Liue Harbor, but the emphasis is on Ganyu as a star of advertising art. In addition, the Visa credit card has a blue Cryo background, which replaces the Liyue Harbour background found in the official art released by HoYoverse.

The advertising drawing of Ganyu is an exciting performance and can serve well as an in-game costume for a cryo character. The Visa advertising campaign conducted by China Merchants Bank is unlikely to reach Western markets, but the artwork can be used for new events. For example, the KFC promo was exclusive to China, but promotional recipes and a windmill were still available in all versions of Genshin Impact.

The growing popularity of Genshin Impact means that more collaborative projects are likely to appear in the future. In fact, HoYoverse is teaming up with the production studio Demon Slayer: Kimetsu no Yaiba ufotable for the new anime Genshin Impact. Genshin Impact 3.1 and later versions may bring exciting new features to the game.

Yana Kramer jokes that she has a “new man in my...