Home Entertainment The Ocarina of Time port for PC finally allows you to Mute... 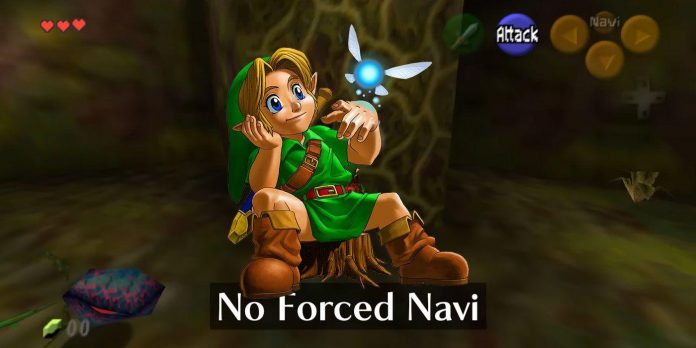 The fan HD port of The Legend of Zelda: Ocarina of Time for PC has finally added a feature that allows players to mute Navi. Many consider Ocarina of Time one of the best Legend of Zelda games and often consider it an influential game in the history of games. Ocarina of Time recently entered the Hall of Fame of The Strong National Museum of Play because of its influence on the video game industry, introducing features such as the goal lock system and context-sensitive buttons that have become standard in video games today.

The Ocarina of Time fan HD port for PC became possible after a team of gamers fully decompiled the game’s ROM into C code last November. Shortly after, Harbour Masters, another team of gamers, began work on an HD port for PC, aiming to make the game more accessible to fans of Legend of Zelda. Although it became known in January 2021 that the port was almost completed and could be available to fans sometime in April 2022, Harbour Masters unexpectedly released the Ocarina of Time HD port for PC in March, a few weeks before it was originally expected.

Developer Harbour Masters (via Games Radar) released a new video Ship of Harkinian Direct, which details all the new features introduced in the latest major update of The Legend of Zelda: Ocarina of Time for PC in HD format. Although the list is extensive, including the introduction of cheats, difficulty options, and support for higher frame rates, one new option is particularly interesting. The update gives players the opportunity to ignore Navi, Link’s fabulous navigator, effectively removing the annoying and persistent catch phrase “hey, listen” for which she is notorious.

Navi is one of the many companions who can accompany Link on his various travels through the Zelda series. While her help is important for solving puzzles, her soaring blue uniform and insistent screams to get Link’s attention often make her presence more annoying than helpful. Even Zelda creator Shigeru Miyamoto hated Navi and considered completely removing the character’s hint mechanics, wanting the puzzle-solving system to be more complex.

While Navi’s presence in The Legend of Zelda: Ocarina of Time has become a cult element of the series, the ability to ignore her interaction through a fan port for PC can be a relief for those who want to experience the game without constant interruptions. It’s also possible that if Navi ever returns to upcoming Legend of Zelda games, Nintendo could take a page from the features of The Legend of Zelda: Ocarina of Time port and make sure the navigator offers hints at the player’s request, rather than constantly boring. Link, while he’s trying to save Hyrule from imminent disaster.