Searchlight Pictures released the trailer for The Night House, their new horror film starring Rebecca Hall (Godzilla vs. Kong). The video shows a widowed woman discovering secrets that can put her life at risk. Check out the preview.

According to the official synopsis: “Recovering from the unexpected death of her husband (Evan Jonigkeit), Beth (Hall) (Rebecca Hall) decides to live alone in the house by the lake he built for her. She struggles to keep it. under control – but then nightmares arise. Disturbing visions of a presence in the house calling out to her, waving at her with ghostly fascination. Against the advice of her friends, she begins to rummage through her husband’s belongings, yearning for answers. she finds are strange and disturbing secrets – a mystery that she is determined to unravel at any cost “.

In addition to Hall and Jonigkeit, the cast of The Night House includes Sarah Goldberg (from the Barry series), Stacy Martin (Casanova’s last love) and Vondie Curtis Hall (from the Daredevil series).

Directed by David Bruckner (The Ritual) and screenplay by Ben Collins and Luke Piotrowski (both from Dark Times), The Night House hits theaters in the United States on July 16. 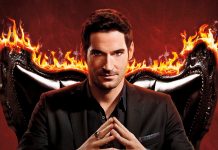