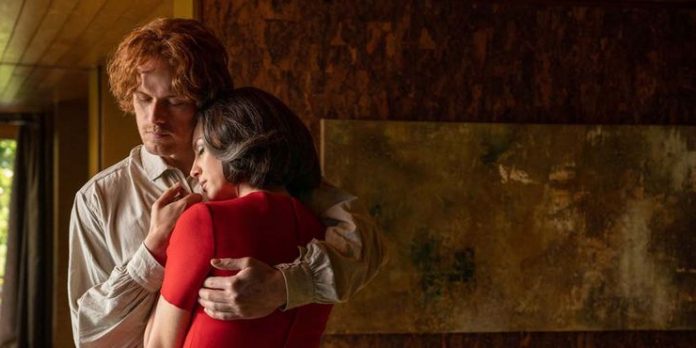 Starz’s sixth series, to be filmed in Scotland, will pick up the events of the fifth season when Claire Fraser (Caitriona Balfe) began her recovery from her attack at the hands of Lionel Brown (Ned Dennehy). The first look at the new season was shared online with Jamie Fraser (Sam Heughan) and Claire sitting in a horse-drawn cart.

The pair exchanged worried glances that hinted that the American Revolutionary War might be closer than Outlander fans might have hoped.

Starz also shared behind-the-scenes footage of the sets and props that were put together before giving Outlander fans a look at the script for episode one. Fans know that the Frasers and MacKenzies will face a number of obstacles in the new installment, but how have the cast found themselves when filming again?

Sharing an update on the progress of the sixth season of Outlander, Sam detailed that they were in production at the moment and obviously all the security protocols that had to be followed due to the pandemic were being followed in detail to keep them safe.

However, Heughan added that filming again was not without its challenges, especially in Scotland due to the terrible cold that it made thanks to the winter time in the country, while admitting that he was grateful that everyone was back filming the series of Starz.

“It’s a bit rough with the weather in Scotland right now, as it’s winter!” the actor explained.

It’s not the actor who has been sharing teasers for the new series with showrunner Matthew B. Roberts, revealing that Jamie and Claire will go through a revolution. After Claire’s attack, Jamie will want to protect his wife as well as the new settlers at Fraser’s Ridge, which will include a face from the past, Tom Christie.

Claire and Jamie have managed to overcome many difficult situations, including spending 20 years apart, but could the Revolution push them to reevaluate their marriage? Claire knows how the Revolution will unfold and will no doubt try to advise Jamie on how to deal with the next war.

However, fans know how stubborn and headstrong Jamie could be, so if he goes against the advice of his wife, there could be an epic fight. In addition there have also been indications that the sixth season of Outlander will include elements of An Echo in the Bone, which involve the death of Jamie. Could this push Claire back to the 20th century once again?

BTS: Suga and Juice WRLD to release collaboration, when does it...