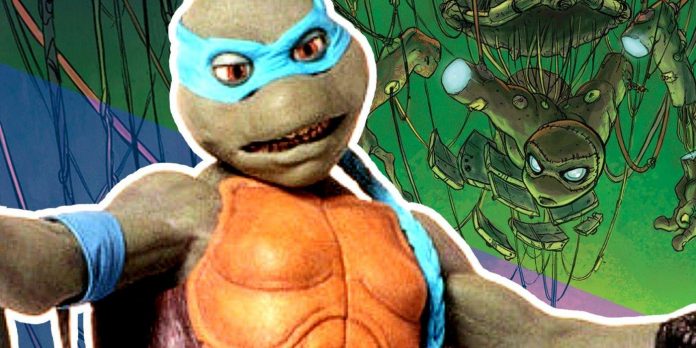 Attention: contains spoilers for Teenage Mutant Ninja Turtles #130!
The Teenage Mutant Ninja Turtles’ controversial sister Venus De Milo steps out of the shadow of her ambiguous past and creates an exciting new identity. After years of being ignored, Venus reappears in IDW Publishing’s continuity after a Frankenstein-inspired body horror series turned her into a punk frog and turtle.
Venus debuted 25 years ago as part of the short-lived 1997 TV series “Teenage Mutant Ninja Turtles: The Next Mutation.” Although the series lasted only one season, the plot twist about the missing sister caused controversy, branded both sexist and symbolic, especially since the only female member of the team was named after a work of art, and not an artist like her brothers. Now the most controversial Teenage Mutant Ninja Turtle is being reinterpreted in a way that shakes it up.
By topic: The classic cartoon of the 80s Teenage Mutant Ninja Turtles returns in a new comic book series
The appearance of Venus De Milo in Teenage Mutant Ninja Turtles #130 by Sophie Campbell and Pablo Tunica (with Kevin Eastman and Tom Waltz as consultants) is as far as possible from Venus sharing the origin of Teenage Mutant Ninja Turtles, as it turns out she was a previously mutated frog. Punk frog Clyde is so convinced of her resemblance to his former lover Bonnie that he desperately wants her to come back with him. Donatello, on the other hand, knows that Venus and his brothers have a bond of their own, and advocates that she go with him, which puts her in direct conflict with her motives as a turtle-frog hybrid. Rejecting these binary paths, Venus chooses her own path.
This shocking reinterpretation of her story takes another step forward when it turns out that a dragon trait has been added to the frog turtle recipe. When mad scientist Jasper Barlow endowed Venus with dragon scales, he facilitated her powerful connection with the mystical astral plane and made her incredibly powerful. Such a change in her appearance and abilities makes it clear that she is a completely different animal than her “brothers”, both figuratively and literally. This is the level of intrigue that this maligned sister has always deserved. Venus De Milo has already demonstrated her new abilities to communicate telepathically and channel a huge amount of energy, returning to the canon in the most stunning way.
Instead of a pale imitation of existing Turtles, Venus de Milo was created from a zombie cyborg template that offers limitless potential. As part of her reappearance after all these years, Barlow presented Venus as a terrifying homage to her eponymous work of art, the sculpture of Alexandros of Antioch, before completely assembling it. The origin of the turtle and the punk frog creates a real tension, as turtles and frogs are at each other’s throats. Having a mystical path also gives her endless space to grow. This change, which made Venus De Milo something more than a turtle, undoubtedly changed her place in the history of Ninja Turtles forever, allowing her to boldly jump into a new era.

The Sandman: Dream And Lucienne Appear In New Image From The...

Zombicide: Undead or Alive taking zombies to the wild west