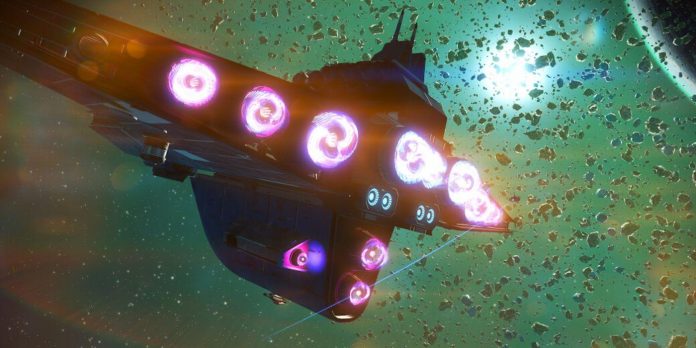 In the new No Man’s Sky update called Endurance, cargo ships and the fleet system in the space survival game have been redesigned. Over the past few years, the developer Hello Games has improved and expanded the game to a truly wonderful space sandbox. The last part of the new content in the title was the update of No Man’s Sky Leviathan, in which players added a flying space whale, and now Endurance improves the largest ships in the game.

No Man’s Sky is a space survival game in which players explore an incredibly vast universe consisting of virtually limitless procedurally generated planets. Although the game was released without many of the promised features, Hello Games eventually added a huge number of different game features and mechanics to No Man’s Sky. Thanks to these post-release updates, players can explore the world together in multiplayer mode, experience the game in virtual reality, improve their spaceship over time, discover alien settlements and much more. In October, the new version of No Man’s Sky for the Nintendo Switch and PS5 will bring the game to new platforms, and Hello Games aims to provide even more free content.

Hello Games founder Sean Murray (via Twitter) has unveiled the new No Man’s Sky Endurance update, a new free update that makes major changes to the fleets and cargo ships of the sci-fi survival game. Truck bases have received several customization options, such as themed rooms, windows, exterior passageways, improved hangars, teleports, technology rooms and a new bridge area. Teams of NPC specialists can now also be hired to work on these huge floating bases, and they can be found in the dynamic patrol of the cargo ship. Organic frigates, cosmic atmosphere, recycled asteroid fields and the Polestar expedition are just a few of the many additions to the Endurance update available in the game right now.

Although Hello Games has already moved the space epic to several platforms, No Man’s Sky for PSVR2 promises to make the sci-fi adventure even more exciting than ever. The virtual reality update, first announced during PlayStation State of Play in June, is expected to take full advantage of Sony’s upcoming headset and its impressive hardware. While little is actually known about how No Man’s Sky will work on PlayStation VR2, the state of the game suggests that combat and multiplayer gameplay will be supported in the exciting new version of the game.

No Man’s Sky is literally overflowing with space content, and the new Endurance update adds even more adventures to players in outer space. The trucks are now much more functional and visually interesting, allowing players to form a much more reliable fleet to explore the stars. Many new personalization options will allow players to create their own interstellar home, which will make No Man’s Sky even more personal and exciting.