Home Entertainment The Netflix Discord bot allows you to watch movies with friends, but... 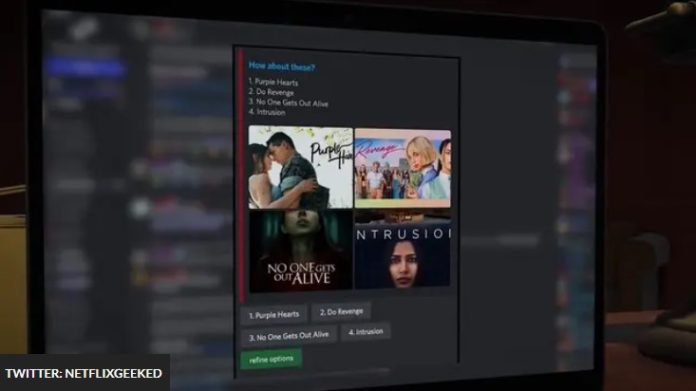 Netflix has just announced its first official Discord bot, which makes it easier to watch movies with friends, but it’s not exactly what you think.

Whether on Discord, Xbox, Playstation, or all together in your own home, watching a movie with friends is one of the most popular things to do together.

Netflix has just launched its first ever Discord bot, which makes it easier to find new movies and shows to watch with friends.

However, this is not exactly what you would expect, as it doesn’t actually stream movies to Discord.

Netflix Launches Discord Bot, But It’s Not What You Think
Announced on October 27 on the Netflix Geeked Twitter account, the accompanying video gives approximate information about what it looks like to search for a movie to watch together.

Install the bot, enter a command, and in just a few clicks the bot will recommend you what to watch with your friends.

Except that the movie doesn’t actually stream on Discord. Instead, it links you to a website, which means that everyone watching should have their own Netflix subscription.

How to Install the official Netflix Discord Bot

The Hey, Netflix app, available in the app catalog, has been installed on more than 19,000 servers since its announcement.

Here’s how to install a bot on your server:

Right-click your server icon and hover over the server settings menu.
In the server settings menu, click on the application directory
At the top of the page, type “Hello, Netflix” into the search.
Open the list of applications and click “Add to server”.
Confirm which server you are installing it on and click “Continue”.
Although the app will still help groups of friends decide what to watch while spending time on their favorite Discord server, many users hoped that the Netflix Discord bot would allow all users to watch the same screen, similar to the Watch Party on Twitch.

To find out more entertainment news and other stories, visit our center.

5 Unsolved Mysteries of K-pop that Fans Need Answers to