Home Netflix The Murder Capital are releasing new songs as they begin their “new... 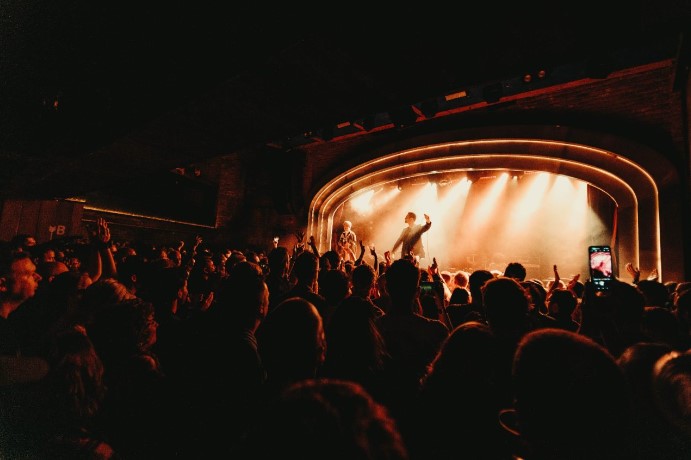 What a show. They are well and truly BACK!! @MurderCapital_ pic.twitter.com/Jv24n6HCO3

Last night (September 22) The Murder Capital went to London’s Lafayette to play their first headlining show in more than a year and open their “new chapter”. Check out the footage from the concert, its setlist and much more below.

READ MORE: The Murder Capital on the new album “Gigi’s Recovery“: “We had to find our sound”
After a string of performances at festivals over the summer, as well as opening performances with Pearl Jam in Hyde Park, yesterday, a few hours before the concert in central London, the Irish five announced their second album “Gigi’s Recovery”. The sequel to the powerful album “When I Have Fears” in 2019, according to vocalist James McGovern, is a “free conceptual record” about “returning to a place of power” and will be released on January 20, 2023.

The band took to the stage of London’s Lafayette and, without saying a word, launched a new single “A Thousand Lives”. Driven by arpeggio synthesizers, this lush track was a much softer intro to the set than The Murder Capital’s usual opening song “For Everything”, but vocalist James McGovern still urged the crowd to “move” before a growling instrumental breakdown.

“Welcome, welcome, welcome,” he said afterwards. “We’re damn glad to see you all here. This is a special day for us. I’m sure you’ve seen all the announcements, our album will be released in early 2023, and we can’t fucking wait. Seriously, thank you so much for joining us, we are glad that you can be with us. This is the beginning of a new chapter for us, so forget about the boys you knew.”

The once swaying audience quickly turned into a seething hodgepodge for “More Is Less” when McGovern told the audience: “Don’t be afraid to fucking move” and invited them to “come closer” before he squatted down to shout the lyrics into the faces of the front row. The brooding “Green And Blue” quickly followed the band introducing a new song, “We Had To Disappear”, which debuted live.

A twitchy, joyful track that mixed the emotional heaviness of Joy Division and the funky assertiveness of Queens Of The Stone Age, the song allowed McGovern’s vocals to assert themselves before a huge guitar breakdown. “Some people say they’ve been waiting a long time for new music — I don’t think it’s been that long,” McGovern joked before the ambitious noise rock “Slowdance I” and “Slowdance II.” In the middle of the track, he jumped off the stage right into the seething crowd.

The murder capital is in London’s Lafayette. CREDIT: Matt Chapman
“Our second single came out today, but before that in July we released another single called ‘Only Good Things’,” he explained. “Whether it’s ironic or not, we’ll leave it to you,” he added as the band launched into a dizzying, passionate track.

“There are many familiar faces in this room. We don’t see some of them anymore, but that will change soon,” McGovern said afterwards, telling the audience that his mother was also on the show. After greeting some diehard fans ahead, he introduced an emotional “On Twisted Ground” by saying, “Back we go.”

The crowd kept a deathly silence thanks to a couple of successful “shhh” from other fans while The Murder Capital played an emotionally rude song. Another new song called “The Stars will Leave Their Stage” soon lifted the mood with a feverish mix of brisk, angular synthesizers before scoring a series of classics of the debut album.

The noisy song “For Everything” lit up the moshpits again, and the crowd shouted the chorus. “That’s the energy we’re looking for,” McGovern said as the band played “Feelings Fades.” “You better be ready to catch me,” he told the crowd, then ducked off the stage. The festive “Don’t cling to Life” showed that the chaotic energy continued.

“We went crazy when we wrote this new album, we won’t lie,” McGovern said as soon as he caught his breath. “Maybe we had our thoughts in Dublin, maybe we still had them in Donegal, [but] as soon as we went to Wexford, we fucking lost them. Oddly enough, we could get them back in London.

After the crowd booed the news that they only had one song left from their set, McGovern suggested: “I’m sure I need to have a late-night chat.” One very loud “damn, yes” was heard from the balcony, to which the frontman instructed in response: “Buy this man a drink.”

“Seriously, we took our time because we felt we owed it to ourselves and to the fans to make a record that mattered to us, and we think we’ve achieved that,” McGovern added as the set came to an end. To close. “On this note, we wish you a good night. This is my favorite song on the record.” Then The Murder Capital launched their finale “Ethel”, a brooding, cinematic track that soon turned into a swaggering communal anthem with a real thirst for life.

The capital of murders has played: