Home Entertainment The Most Popular Netflix Movies of All time 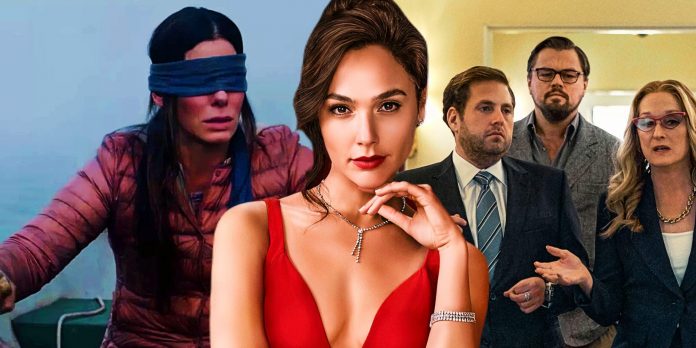 Streaming platforms made it so that movie theaters are no longer the only way audiences can find engaging, big-budget productions – as shown by Netflix‘s most-watched movies of all time. What was once envisioned as an alternative to video rental stores, to the point the giant Blockbuster franchise ceased to exist, evolved into a global platform that also offered exclusive content. After shows like the seven-season Orange Is The New Black and the ongoing Stranger Things proved that streaming platforms could produce original content for TV on a high level of quality, having original movies released almost on a weekly bases became common for Netflix.

While not all the Netflix movie releases share the same level of budget and production value, the streaming service’s current output of releases makes it so that many different stories and genres can find their way to audiences. Recently, Netflix has also presented itself as a strong competitor in the streaming bid wards for huge movie IPs, with Rian Johnson’s Knives Out 2 being a great example. Other powerhouse creators, such as cinema legend Martin Scorsese and Avengers: Endgame directors Anthony & Joe Russo, have also recently worked with Netflix.

Related: What Does Glass Onion Mean? Knives Out 2 Title Explained

Many of these major names, both behind and in front of the camera, can be found in Netflix’s most successful titles. While new, creative stories can make for hit movies, the star power of figures like Sandra Bullock, The Rock, and Ryan Reynolds still seem to be the biggest draw for the audiences. Either way, Netflix’s most-watched movies of all time — a metric that is now measured through hours watched — involve action, dramas, and even romantic comedy. Here is the top 10.

The mixture of action with comedy has worked more than once for Netflix’s original movies. That is the case of Spenser Confidential, a 2020 movie that still figures among the streaming platform’s most-watched titles. Mark Wahlberg plays Spenser, an ex-cop who teams up with an aspiring MMA fighter, Winston Duke’s Hawk, to solve the murder of two of his colleagues. In 2020, director Peter Berg said that a Spenser Confidential sequel was happening, but no updates followed.

6 Underground marked the beginning of a successful collaboration between Ryan Reynolds and Netflix. Reynolds was not the only big name in the production, as the action-packed movie about a tech billionaire turned into a secret agent was directed by Michael Bay. While as not impressive as other similar movies from the director, 6 Underground has spent the last couple of years as one of Netflix’s most-watched movies of all time.

Nailing a romantic comedy is not an easy task, but Netflix’s The Kissing Booth managed to engage audiences all around the world in 2018. The success of the book adaptation starring Joey King and Jacob Elordi was such that a sequel, The Kissing Booth 2, was obviously going to happen. The story would then be wrapped up with 2021’s The Kissing Booth 3. Still, the middle chapter remains the most-watched entry in the trilogy.

If there was still any doubt about Netflix being a valuable option for Hollywood’s biggest filmmakers, those ended as soon as Martin Scorsese’s The Irishman found a home on the streaming platform. Scorsese had spent years trying to get the film made, with the final product reportedly costing over $225 million. The Irishman brought together long-time Martin Scorsese collaborators such as Robert De Niro, Al Pacino, and Joe Pesci, and it also involved the expensive and still-in-evolution de-aging technique. Despite being a Netflix original, The Irishman had an exclusive theatrical run of 26 days before landing on the platform.

While Bird Box is still Sandra Bullock’s most-watched movie on Netflix, the actress has another film among Netflix’s most-watched titles: 2021’s The Unforgivable. The drama follows a woman released from prison after serving time for murder while she tries to find the younger sister she ended up abandoning. Despite the good viewership numbers on Netflix, The Unforgivable was not well received by the critics, and it has a 37% score on Rotten Tomatoes.

The action-packed movie starring MCU Thor actor Chris Hemsworth premiered on Netflix in 2020 and quickly rose to the list of most-watched movies on the platform. Extraction was produced by Avengers: Endgame directors Anthony and Joe Russo, the latter of who also wrote the film. At a time when even the major Hollywood studios struggled to nail an action movie outside of an IP, the success of Extraction was more than enough to get a sequel to greenlight. Extraction 2 is expected to come out on Netflix either in late 2022 or 2023.

Ryan Reynolds and Netflix continue to prove how successful their collaboration is. After 6 Underground and Red Notice, the actor and producer’s next Netflix movie was The Adam Project. The time travel sci-fi adventure sees Ryan Reynolds mentoring his younger self in a story that involved both spaceship dogfights and heart-whelming family moments. In addition to Ryan Reynolds, The Adam Project’s cast also had names like Zoe Saldana, Jennifer Garner, and Mark Ruffalo – all of whom helped draw the audiences’ attention to the movie.

Netflix has worked with more and more top Hollywood talent each day, but in 2018 the streaming platform was already collaborating with an actor as big as Sandra Bullock. With an extensive marketing campaign and a thrilling premise, Bird Box became a must-watch Netflix movie right away. The Sandra Bullock-led film about a post-apocalypse world in which humans can be driven to suicide only by looking at the mysterious monsters would also become the source for many Bird Box theories, which made Bird Box’s impact on the platform last longer than the usual.

An Academy Award winner director, a cast with some of Hollywood’s biggest modern-era stars, and a story that sparkled discussions on real-world issues came together to make Don’t Look Up the second most-watched Netflix movie of all time. Led by Leonardo DiCaprio and Jennifer Lawrence, almost every scene of Don’t Look Up featured a recognizable name, including but not limited to Maryl Streep, Tyler Perry, Timothée Chalamet, and Ariana Grande. Don’t Look Up’s satirical take on how humanity deals with topics such as climate change was not as subtle as in other Adam McKay movies, but the world’s recent experience with the COVID-19 pandemic made it almost impossible for Don’t Look Up to go unnoticed by audiences’ all over the globe.

If just one A-list Hollywood star is enough to spark interest in a movie, it is no surprise that the combining efforts of Gal Gadot, The Rock, and Ryan Reynolds would create Netflix’s most-watched movie of all time. The high-scale heist adventure directed by Rawson Marshall Thurber bet on the charisma of and chemistry between its main actors, with a story based on a simple but fun premise of an FBI investigator teaming up with an art thief to catch a much more skilled criminal. Red Notice did not resonate with the critics, and it currently has a 36% score on Rotten Tomatoes, but that didn’t stop it from being Netflix‘s most-watched movie to date.

Lost Ark | The March Update Is Now Available: All The...