Home Entertainment The most difficult achievements in Dark Souls 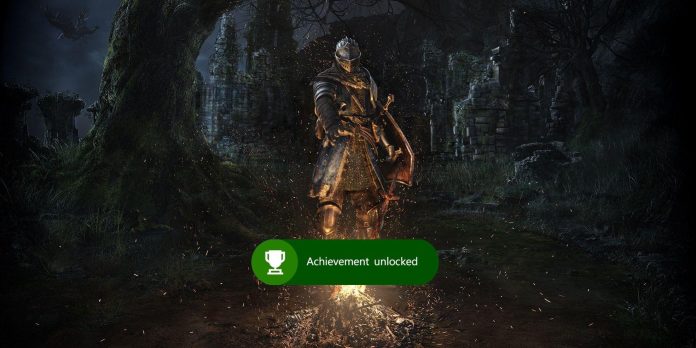 Dark Souls has the reputation of being one of the most challenging games of modern times, and for good reason. Dark Souls is a gauntlet of powerful enemies and deadly traps, and so it’s no surprise that its achievement list is equally challenging.

Dark Souls is full of ultra-tough achievements that require players to invest a significant amount of time in the game if they hope to 100% it. The popularity of Elden Ring may see new players check out FromSoftware games like Dark Souls and its sequels for the first time, and so they may want to have an idea of what they’re getting themselves into if they set out to get 100% completion.

Here are the five rarest Dark Souls achievements, according to Xbox statistics.

To unlock the Magic Weapon achievement in Dark Souls, players need to acquire the best weapon through magic reinforcement. If players attempt to do this from scratch, they will need nine Titanite Shards, 10 Green Titanite Shards, eight Blue Titanite Chunks, and then one Blue Titanite Slab. They will also have to retrieve the Large Magic Ember and deliver it to Rickert of Vinheim, located in the dangerous New Londo Ruins. Players can speed up the process by upgrading a weapon that’s already infused with magic, but it will still be quite the challenge.

To get the Large Magic Ember, players have to make their way through The Duke’s Archives, which is one of the most notoriously challenging areas in all of Dark Souls. After that, they have to reach and defeat Seath the Scaleless. When that’s done, they then have to backtrack to a room that they otherwise would have no reason to ever return to, and that’s where they’ll find the Large Magic Ember. Getting the rest of the crafting materials is no cakewalk either, especially when it comes to the Blue Titanite Slab.

Blue Titanite Slabs are incredibly rare crafting materials in Dark Souls. One can be found in the Crystal Cave, while another can be found in the Royal Woods, an area only accessible to those with access to the Artorias of the Abyss DLC areas, which requires a significant time investment in and of itself. The problem is the Blue Titanite Slab located in the Crystal Cave requires players to traverse a dangerous invisible path, making it extremely difficult to reach. Another achievement requires a Blue Titanite Slab as well, so for some players, it may be easier to simply get the Magic Weapon achievement in New Game+ to avoid having to deal with the invisible bridge. They also have the option of killing a million Moonlight Butterflies and praying that a Blue Titanite Slab drops from those efforts, but it would probably be faster to simply go through the game again.

For this achievement, Dark Souls players have to acquire all the pyromancies in the game. There are 19 pyromancies to collect, with many of them purchasable from Laurentius, who is relatively easy to find and eventually relocates to Firelink Shrine. However, the trick is that some pyromancies have to be purchased from merchants whose interactions aren’t quite as straightforward, like Quelana of Izalith, for example.

Quelana will show up at the bottom level of Blighttown, but only after specific conditions are met. Basically, Dark Souls players need to upgrade their Pyromancy Flame to +10 for Quelana to start appearing in Blighttown, though some have claimed that having a co-op partner with those requirements met has made her spawn as well. Regardless, Quelana sells some exclusive pyromancies, so players will have to fulfill the conditions and talk to her.

Dark Souls players will also need to join the Daughter of Chaos Covenant and give up precious Humanity to rank up and gain two more pyromancies. They will also have to buy the Toxic Mist pyromancy from Eingyi, though this only becomes an option after one gets purposefully infected with an egg parasite.

To unlock the Prayer of a Maiden achievement in Dark Souls, players need to acquire all the miracles in the game. There are 23 miracles that Dark Souls players need to collect to get the achievement, and while some are as simple as talking to the right person, others are a bit more complex. A couple of the miracles require Dark Souls players to join the Gravelord Servant covenant, which is completely missable if players have already killed Gravelord Nito. Another miracle is only available by handing over 10 Souvenir of Reprisal items to the Darkmoon Blade covenant, which at this point will likely require players to kill the crow-like enemies in the Painted World of Aramis a hundred times over.

While it’s not the achievement with the lowest unlock rate, Knight’s Honor is still the hardest achievement to unlock in Dark Souls. This achievement requires Dark Souls players to play through the game about 2.5 times, as they have to basically collect every notable weapon and piece of armor. The problem is that some of this gear has to be crafted using the souls of defeated Dark Souls bosses, and players have no way of making the bosses respawn without starting a New Game+ run. They then have to advance far enough to reach the appropriate blacksmiths that can work with the boss souls to craft the appropriate gear.

This also requires players to join the Darkwraith Covenant, which is difficult to find if players aren’t using a guide. It basically requires Dark Souls players to ignore Frampt at Firelink Shrine after obtaining the Lordvessel and instead head straight to The Abyss. After defeating the Four Kings in The Abyss, players then have to speak with Kaathe. If players answer Kaathe’s inquiries correctly, they will be granted access to the Darkwraith Covenant and will be rewarded with the Dark Hand weapon for their efforts.

To complicate matters further, players also need to collect weapons that are only obtainable by cutting the tails off certain bosses. Some of these are fairly easy to do, and it’s likely that Dark Souls players will happen upon them by accident. However, there are times when this can be tricky, particularly when it comes to the boss fight against Seath the Scaleless, as it can be incredibly difficult to get behind Seath to hit its tail. Accidentally killing a boss before cutting the tail off means that the weapon in question is gone forever unless Dark Souls players start a New Game+ run, so it’s really no surprise that Knight’s Honor is such a rare achievement.

The Dark Soul achievement is the rarest achievement in Dark Souls, and that’s for a simple reason. It’s an achievement that players get for unlocking all the other achievements in the game. This means beating the game multiple times, finding all the rare items and spells, farming crafting materials to max out one of each weapon type, discovering the different covenants, etc. Needless to say, it’s no easy feat, and is a significant time investment.

Dark Souls Remastered is available for PC, PS4, Switch, and Xbox One.