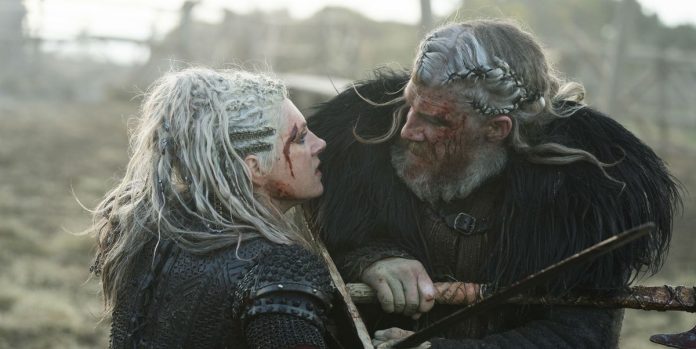 It’s logical to assume that resolving disputes peacefully in Vikings was never an option for the people who lived during that time. Each disagreement ended in murder. Here are perfect examples of these cases:

The death of Helga’s daughter (Maude Hirst) affects him for a long time. She never really gets over it in Vikings. When she meets an Arab girl named Tanaruz (Sinead Gormally) in the Spanish Caliphate, she takes her as her slave but treats her as her own daughter.

Unfortunately, Tanaruz is not very happy to be displaced from the place that she has always known as her home. In the Vikings season 4 finale, she decides to take extreme measures.

She plunges a dagger into Helga’s neck before taking her life from her, as she knows that she will be punished if she lives. It’s a tragic ending to Helga’s (Maude Hirst) story, considering the fact that she only sought happiness by receiving Tanaruz.

Most Vikings fans have a problem with the way Lagertha (Katheryn Winnick) was killed. Given how fierce a warrior she was, she at least deserved to die in battle. Sadly, that is not what happened.

As Hvitserk (Marco Ilsø) wanders, he sees the trail of a snake. He follows him and when he finds him, he begins to stab him in anger, believing him to be Ivar. As soon as he finishes, he realizes that he is, in fact, Lagertha (Katheryn Winnick).

Aelle tortures him, even carving a cross on Ragnar’s (Travis Fimmel) head. He asks Ragnar to repent and be saved, but he refuses. Instead, Ragnar gives a lengthy speech about how he awaits a feast at Valhalla.

He appears to be content to go to mythical heaven as his cage hangs over a drain hole. Bored by the harshness of him, Aelle drops him into the well below and the snakes feed on him. It’s a brutal way for the protagonist of Vikings to say goodbye.

Cardi B very in love with Offset: She declares her love...