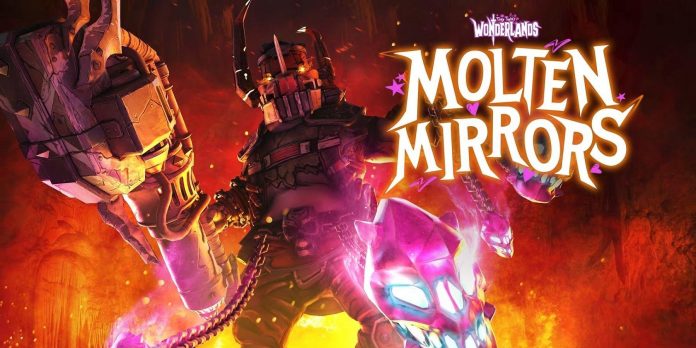 Tiny Tina’s Wonderlands was released earlier this year and received positive reviews from critics. In the first few months of 2022, several major games were released, such as Elden Ring, Horizon Forbidden West, Dying Light 2 and LEGO Star Wars: The Skywalker Saga, but Tiny Tina’s Wonderlands managed to succeed in sales despite overcrowding. the release window.

Borderlands fans also seemed to be pretty pleased, although the game was heavily criticized after launch. Although Gearbox has confirmed that Tiny Tina’s Wonderlands will not receive story DLC like previous Borderlands games, DLC Coiled Captors and Glutton’s Gamble have been criticized for reportedly only offering 10 or 20 minutes of new content. Fans naturally expected more significant additions, especially considering the many free and paid DLC released for Borderlands 2 and Borderlands 3.

Gearbox Software confirms that the third paid DLC for Tiny Tina’s Wonderlands called Molten Mirrors is now available on all platforms. The developer released a trailer to celebrate its launch, as well as a blog post detailing the new content. The short trailer gives an idea of what players can expect from the DLC, and it basically consists of the main character shooting at various types of enemies while trying to avoid traps.

In the Molten Mirrors DLC, players are tasked with infiltrating a well-fortified prison. They will need to take care of his mechanized defense, including turrets and furnaces, before challenging boss Fyodor the Guardian of Souls. Enemies in this area start at base level 13, but it is confirmed that they scale along with the player’s level in Tiny Tina’s Wonderlands. The blog then provides more details about the DLC, including a planned timeline for when Fedor will take on a more lethal form.

Molten Mirrors also adds a new Blightcaller class to Tiny Tina’s Wonderlands. Blightcaller will pay great attention to handling spirits and summoning storms for poisoning, as well as natural damage. Tiny Tina’s Wonderlands differs from the character classes found in previous games and allows players to fully customize the Creator of Destiny. Users can choose from six main classes, with the exception of Blightcaller, each of which offers unique active and passive skills. Fans can also choose a secondary class after completing part of the main story, which will allow them to choose a direction that suits their style of play.