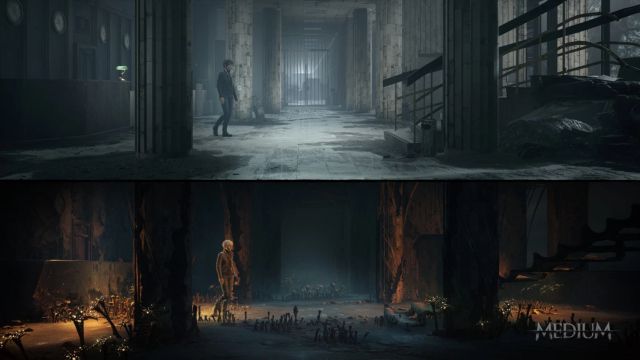 Bloober Team reasons why it is more complicated than using split screen in multiplayer games. The Medium was the first game designed for the new generation of Microsoft consoles.

The title has been released on PC, Xbox Series X and Series S, but has not appeared on Xbox One. The reason for this decision is that the video game renders two realities at the same time, as producer Jacek Zięba has assured in the official Xbox blog. Of course, without mentioning at any time the previous Redmond machine. In his words, using these two dimensions simultaneously is very different from offering split screen in a multiplayer game.

“Almost all games that add split screen support show two different versions of the same location,” explains the producer. “In The Medium, the real world and the spiritual world look completely different and use their own range of graphic resources such as modeling or textures. That’s a lot more demanding when it comes to memory, space, and rendering costs. ”

The video game implements various effects such as motion blur or ambient occlusion, which “need to be calculated and rendered twice.” Therefore, the title consumes a “significant amount of VRAM” and requires a faster hard disk than those mounted by “the previous generation of hardware”. While it may look “similar in images or trailers,” technically speaking it “just works differently” than the usual split screen in multiplayer games.

The Medium is a horror thriller developed by Bloober Team, the creators of Layers of Fear and Blair Witch. The game tells the story of Marianne, a medium who will have to unearth her tragic past to remember what she was, what she is and what she will be. Xbox Game Pass subscribers have the ability to download and play it, as it has been available on the service since its launch.

NVIDIA Reveals It Used Digitally Made CEO in Conference