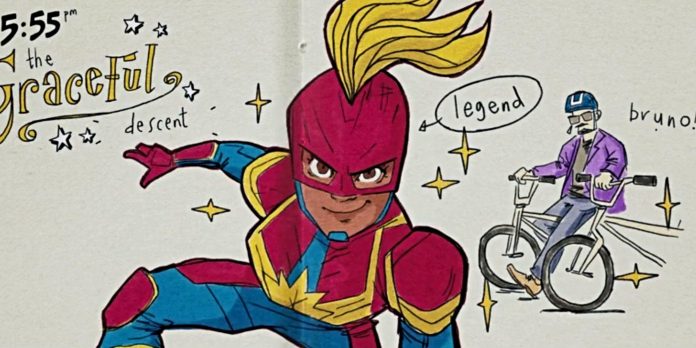 Screenwriter and creator of Miss Marvel Bisha K. Ali recently explained the show’s unique visual style. In the latest Marvel Cinematic Universe TV series, Iman Vellani plays Kamala Khan, a high school student from Jersey City who moonlights as the superheroine Miss Marvel. Originally introduced to Marvel Comics in 2014, the character became a hit with fans, and Kamala quickly integrated into the main storylines of the main Marvel characters. It was quickly adapted to other media, such as shows and video games. Next year, the character will appear alongside Captain Marvel (Brie Larson) and Nick Fury (Samuel L. Jackson) in “Miracles” next year.

The Miss Marvel series for Disney+ presented the popular character live for the first time and complemented the impressions with a bright visual style. Thanks to the use of graffiti, animated drawings and clever framing, some episodes look like comics. In the first two episodes of the show, this style was used for moments when Kamala’s mind drifts, when she dreams, or when the character communicates with her friends via text messages. For example, when Kamala sends Bruno a text message about going to the first annual AvengerCon, the messages are organically displayed in the background of the scene, for example, on the street where Bruno crosses the road, in the shop window at the corner of Circle Q in the form of neon lights or on the Ceiling of Kamala, from her words, formed a projection of stars from her nightlight.

In a recent interview with EW, Ali detailed the origins and uses of Ms. Marvel’s distinctive art design. When asked if the writer worked with the directors of the series to create such a unique visual style, Ali explained that it originated at the beginning of the writing process and was initially used only when Kamala dreamed, but later its use was expanded as production progressed. Read below what the writer said.

“The whole team took it up. It all started with a seed, and then turned into a snowball. I know it’s a mixed analogy, but I think you get it. [Laughs] There were elements of this in the earliest sketch. the pilot episode where we are inside her head. At first it was my approach, and then they just used it and extended it to the whole show. When you look at these comics, you will see this liveliness. and skill in every single part of this comic. Even the background image is textured, layered and whimsical, and there are jokes and Easter eggs on these panels. We thought, “How will you bring this to life?””

Although the series has not kept its fidelity to the source material regarding Kamala’s non-human origins and abilities, Ms. Marvel’s strong vibrant aesthetic has miraculously translated the artistic design of the original comic. Scenes from the Disney+ series seem torn from the pages of Miss Marvel comics. The show’s end credits even use comic book art in the form of graffiti on the walls of buildings in Jersey City. The bright colors and playful tone of the superhero series are combined with the optimistic and cheerful performance of Vellani.

In episode 1, Kamala planned her escape on AvengerCon with precision to the sequence implemented in detail as she imagined how her journey would unfold. Combined with comic book-style framing, hand-drawn animation and floating colorful text, the visual design of the scene gave viewers a unique look at the mind of the hero, which was not previously available in most MCU projects. As Ms. Marvel continues, the style of the episodes may change as she uses her abilities, and the burden of responsibility for her newfound abilities is lowered.

The Batman: New Plot Synopsis by Robert Pattinson and His Director