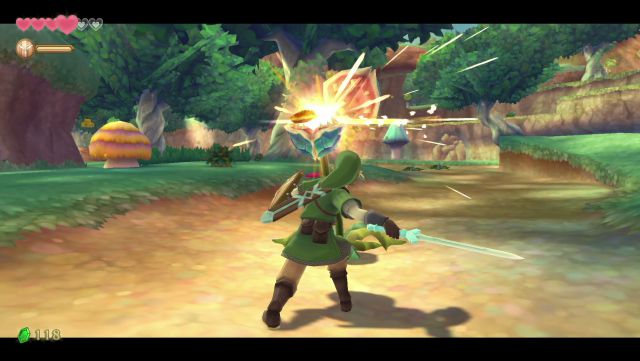 The Legend of Zelda: Skyward Sword HD: The Wii classic returns with high definition and adapted controls, but also fewer improvements than other recent Nintendo remasters. Perhaps the large number of play-offs that populate the Switch catalog invite you to think otherwise, but the truth is that Nintendo has proven to be quite a reluctant company when it comes to recovering and improving the games of its first 3D generations. For every Nintendo 64, GameCube, or Wii title that’s been remade or remastered of some kind, we can all think of at least half a dozen of similar quality that still don’t benefit from that deal. It is a problem, however, that does not affect the Zelda saga: with the arrival of Skyward Sword HD to Switch this week, all its three-dimensional deliveries will have made the leap to later consoles through versions with significant improvements over the originals.

Ocarina of Time and Majora’s Mask came to 3DS from the Japanese Grezzo (also responsible for the recent Link’s Awakening remake) with a complete facelift that included model and texture changes; Nintendo itself was responsible for adapting The Wind Waker to Wii U with a new lighting system and numerous improvements to streamline the gaming experience; and the Australian Tantalus was in charge of the Twilight Princess remaster, less impressive in its changes, but also with a fairly thorough retexturization to better adapt the game to the company’s first HD console. This July 16, as we say, Skyward Sword will finally join this list; although after completing it, our feeling is that it will not do so by demonstrating an effort comparable to its predecessors.

Recapturing the quirks of the Wii

But first things first, and you can’t talk about Skyward Sword without contextualizing its original release in 2011 or its position as one of the last great Wii games. The one in charge of closing the Wiimote stage with its most extensive and varied use. Nintendo’s third console of the 3D era rejected the jump to high definition of its contemporaries (Xbox 360 and PlayStation 3) to bet on a new method of control with a pointer and motion sensor, a disruption that the company considered necessary to recover audiences gradually lost behind Nintendo 64 and GameCube. The play, as we all know, went well and the Wii and Wii Sports pack flew out of stores at an unprecedented rate.

Difficulties appeared later. The sports compilation was created on purpose to bring the controller and its proposal closer to a wide range of public as possible, but in parallel it was also adapted from GameCube precisely Twilight Princess, a much more traditional game with exploration, puzzles, sword fighting and all the percale. Using the infrared sensor to use the slingshot, hook, or bow pointing directly at the screen was a celebrated implementation, but the sword was limited to converting wrist gestures into one-button equivalents, a simplification of which not a few games would sin. classic profile for the rest of the Wii life. Part of this was due to Nintendo’s love of making games accessible, but also due to the natural limitations of the controller. So late in the generation, the company decided to release a more accurate revision: the Wii MotionPlus.

Ring Fit Adventure: Nintendo does not rule out new content